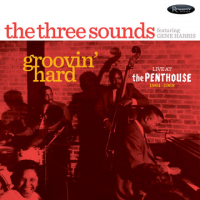 In the five years spanning 1958 to '62, not only a time of great consolidation and experimentation in jazz but a glorious age for the label, who would you guess was Blue Note Records' best-selling act? Thanks to their nine albums and nearly two dozen more jukebox singles, it was The Three Sounds.

Led by pianist Gene Harris with constant bassist Andy Simpkins and a rotation of drummers, the Sounds helped solidify the acoustic piano trio as a vehicle for advanced jazz improvisation in the simplest but most profound manner possible: They played good, soulful music that people loved to hear. The rocking and rolling Groovin' Hard adds previously unreleased music from three different versions of the Sounds (swapping drummers Bill Dowdy for Carl Burnett for Kalil Madi) recorded during five years of engagements at Seattle's legendary local jazz treasure, The Penthouse, to their catalog.

"Gene came out of the church and he loved the blues. But he loved Erroll Garner and Oscar Peterson and mixed all of that up together," recalls pianist and Harris acolyte Monty Alexander in this set's notes. "His touch on the piano was crystal clear, immediately bringing up the feeling of blues as well as that cross between church and blues. He was greasy!" Harris sees himself much more simply: "I call myself a blues pianist with chops."

Groovin' Hard genuinely grooves hard. "Blue Genes" translates its boogie-woogie shuffle into an all-out sprint, with the rhythm section laying down the four/four and the piano leaping and dashing like an Olympic hurdler. Harris' original "Rat Down Front" has boogie form but rock 'n' roll delivery, like Art Tatum meeting Jerry Lee Lewis in a screaming caffeine rampage, and this set winds down with the first commercial release of the self-explanatory "The Boogaloo." If "The Boogaloo" doesn't get your head to bobbing or your toes to tapping, please make sure they're still attached.

Harris' touch with ballads and other gentle ruminations proves deft and distinguished. "The Shadow of Your Smile" faithfully renders Johnny Mandel's stylish sense of romance and grace, swinging on cymbals so soft and sure that it seems to shimmer. The open space in "The Night Has a Thousand Eyes" winks in the directions of Ahmad Jamal and Antonio Carlos Jobim's "One Note Samba" with funky elegance.

Groovin' Hard sounds and feels like a smooth glass of the finest brandy served neat, with each track its own small yet intoxicating sip. "The Three Sounds were my introduction to bluesy, funky style jazz and I have cherished them and collected their recordings ever since," explains Resonance Records founder George Klabin. Adding Groovin' Hard to their distinguished legacy must be so rewarding to him.

Girl Talk; The Night Has a Thousand Eyes; Blue Genes; The Shadow of Your Smile; Rat Down Front; Yours Is My Heart Alone; A.M. Blues; Bluesette; Caesar and Cleopatra; The Boogaloo.

About The Three Sounds