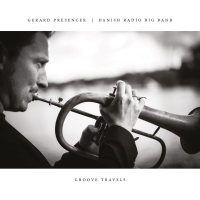 Something of a child prodigy Gerard Presencer became a member of Britain's acclaimed National Youth Jazz Orchestra in 1983 at a mere eleven years of age and NYJO's youngest trumpeter. Along with other young talented UK musicians such as Courtney Pine and Tommy Smith, Presencer was part of a new wave of British jazz. He's played in bands led by Stan Tracey and Charlie Watts but perhaps his most well-known role occurred at age 18 when US3 commissioned him to play a trumpet solo on a re-working of Cantaloupe Island ("Cantaloop Flip-Fantasia") on the band's huge-selling Blue Note album Hand On The Torch. He's also a noted academic, formerly Head of Jazz studies at the Royal Academy of Music in London from 1999 to 2010 and currently Head of the Brass Department at Berlin's Jazz Institute. He lives in Copenhagen and is trumpet soloist with the world famous Danish Radio Big Band, hence the recording of Groove Travels with the DRBB, but interestingly this is only the fourth album under his own name.

The seductively silky opener "Another Weirdo" reminds the listener of the sumptuousness of Joe Zawinul's elegant "74 Miles Away" and, in common with the five other tracks on the album penned by Presencer, demonstrates that this virtuoso trumpeter -his magnificently soaring flugelhorn solo punctuates the skilful arrangement -also has great compositional skills too. Presencer's flugelhorn cadenza introduces the multi-paced and intricately constructed "Blues For Des." Karl-Martin Almqvist solos here on tenor saxophone in addition to more interspersed blues-infused flugelhorn soloing.

"Ballad or Tango of the Misunderstood" is aptly-titled since it simultaneously combines the characteristics of a ballad and a tango. An engaging Fender Rhodes solo by Henrik Gunde precedes Presencer soloing on flugelhorn and Pelle Friddell on soprano sax, whose solo, somewhat curiously fades out at the conclusion of the track. "The Devil's Larder" has an instantly gripping melody line played by Presencer and then taken-up by the whole ensemble which here is multi-tracked giving the effect of a dynamic double big band.

Lennon & McCartney's "Eleanor Rigby" is given a stunningly dynamic reading with impressive solos by Presencer on flugelhorn and guitarist Per Gade describing a rather different take on the classic Beatles number than Wes Montgomery's unforgettable version on his 1967 album A Day In The Life. As suggested by its title, "Istanbul Coffee Cup" has a Middle Eastern flavour and the big band arrangement exudes an air of minor key sultriness perfectly epitomising Presencer's intended album concept of "grooves" or impressions that have affected the musician both in time and place.

The familiar melody of Wayne Shorter's "Footprints," cast in a less familiar big band setting, offers an opportunity for robust solos by tenor saxophonist Hans Ulrik Jensen and Steen Hansen on trombone as well as Presencer on trumpet and flugelhorn. The closer is the Billy Nicholls ballad "I Can't Stop Loving You" made famous first by Leo Sayer and later by Phil Collins and here embellished by a gorgeously mellifluous trumpet solo by Presencer. Whilst this is Gerard Presencer's first big band album, his imaginative compositions and taught arrangements make this an intensely satisfying and successful project, aided considerably by one of the world's finest large jazz ensembles.