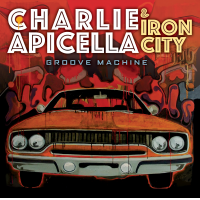 On Groove Machine, Charlie Apicalla & Iron City serves up a gumbo of styles that run from New Orleans blues and Chicago funk to Motown and New York bop. The combination makes for a "groovy" listening experience—road music that will keep the head nodding and the mind trucking. Apicella penned five of the eight numbers on the album. The other three writing credits go to Lou Donaldson, organist Radam Schwartz, and Willis "Gator" Jackson.

Apicella's standout guitar work glides through the various pieces with a joyful and easy twang. But the spotlight on this album shines on Schwartz's deft organ work. He too glides, both in his solos and in his accompaniment. But there's energy in his playing, subtle and laid back as it may be, and it gives each piece a special boost. Beyond the hands, Schwartz also gives the organ pedals a workout, walking the bass lines as easily as he creates the chordal background to many of his band mate's solos. The other members of Iron City add their own rollicking efforts as well, but never in a slap-happy manner. Instead, the playing on Groove Machine is crisp and dynamic, and although relaxed, there's a professional tightness to the playing that serves to enhance the various moods created.

Take the cool rendering of "Three Sided," the boppish "Space Madness" (which ends with a scorching solo by Freddie Hendrix), or the rolling Donaldson song "Hot Dog," where Hendrix again blows hot followed by Schwartz's slide and glide solo. Each of these pieces demonstrate the ensemble's comfort with a mix of styles. The mix continues with the sexy and sensual "Lemon Rind," pushed along by the fluid work of saxophonist Gene Ghee and Hendrix, and funked up by Mayra Casales conga work, and it is followed by the peaceful "Along the Southern Coast," where violinist Amy Bateman joins Apicella in a warm duet before she gets her chance to solo. The number echos the beauty of most coastlines, with their rolling dunes, gentle breezes, and that special saltwater fragrance.

Schwartz contributes the lively dance composition "Calypso Blue," which features a raucous duet between Casales and drummer Alan Korzin. Apicella's cool "Ironcity" pushes along like a speedy nighttime freeway drive and features Korzin on several breakaway solos. The album closes with Willis Jackson's "Brother Elijah," an up-tempo gospel number that bounces along like a beach ball in the stands at a baseball game.

The music on Groove Machine will certainly brighten the day, and it goes well whether cruising down the highway or strolling down a sidewalk sipping on that special cup of joe. It's bright and sunny disposition is guaranteed to remind one that there is indeed a groovy somewhere over the rainbow.