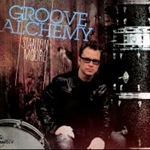 Groove Alchemy is not only the perfect title for Stanton Moore's album, it effectively sums up the unique means by which he makes music. The rhythm he conjures up morphs into melody then back again in such as remarkable natural fashion, it almost (but not quite) defies description.

It's voodoo of some kind the way Moore hammers out the beat of the first two tracks, "Squash Blossom" and "Pie Eyed Manc," only to have them shape-shift into the fluid motion of Robert Walter's organ and the quick flick of Will Bernard's guitar. Perhaps more so than its predecessor, Emphasis! (on parenthesis)(Telarc, 2008), this CD illustrates how the lightning tradeoffs between the trio are essential in keeping the sound vibrant no matter what turns they take.

Breaks like the one Stanton Moore takes on that track give some practical insight into how fascinating it is to hear him play. He can move around his drum kit to delineate a melody line with both nuance and gusto, which is also why he has the innate ability to dig into the proverbial pocket as deeply as he does on "Keep on Gwine," thus allowing Walter and Bernard to wind out their respective throttles, resting assured the bottom is stable and firm.

Traditional funk never falls flat in the hands of these three, as the somewhat conventional structure of that tune suggests. On "Shiftless" and in the more syncopated form of "Knocker," the effect is similarly potent. Moore, Walter and Bernard have worked together in various lineups, including this three-piece ensemble, for a number of years, which fosters interaction that simply can't be composed and arranged past a certain point. Split-second turnarounds and pickups such as theirs are the result of refined intuition.

The main man's fondness for hard rock comes to the fore on "Cleanse This House," as Bernard and Walter join in with their own atonal afterthoughts that segue neatly into the more atmospheric "Aletta," a sequence that reaffirms no two cuts on this album sound exactly alike. It makes sense then to see this album in the context of of a larger project (including a DVD and a book) that serves to instruct on the technique and the history of Stanton Moore's approach to collaboration.

Groove Alchemy, however, is anything but academic and should serve equally well as inspiration to dance as to coolly observe the niceties of rhythm.