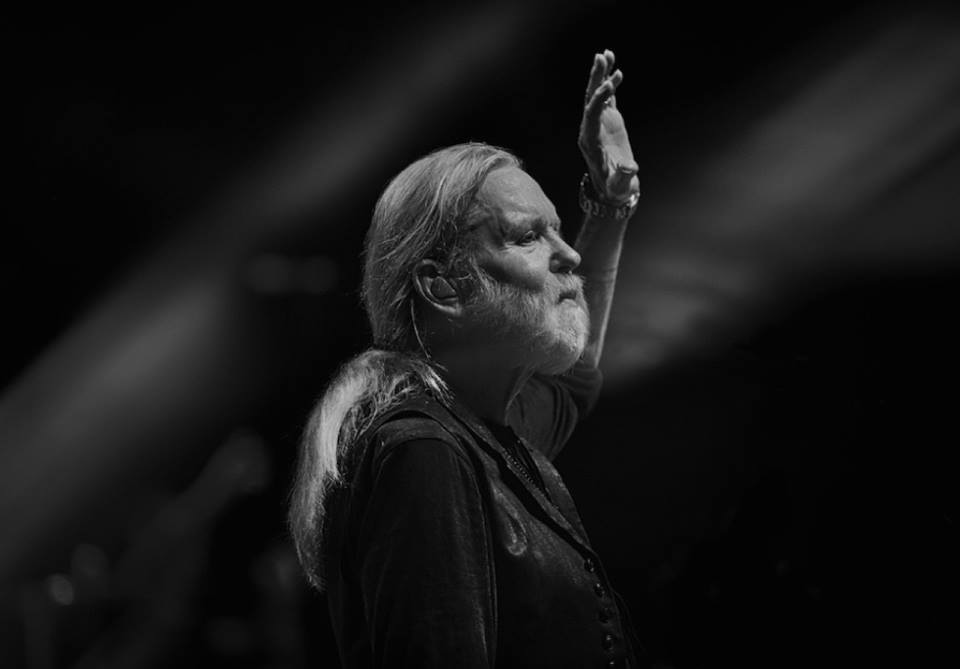 By C. MICHAEL BAILEY
May 30, 2017
Sign in to view read count
"Well, I'll keep on moving. Things are bound to be improving these days. One of these days..."

Gregg Allman recorded Jackson Browne's lament for his 1973 Capricorn release Laid Back. The song clung to him like smoke, the length of his career, surfacing here and there, until, finally he sang the song with its composer for the special, All My Friends: Celebrating the Songs & Voice of Gregg Allman (Rounder, 2014). That was a fine moment, one curiously prophetic in the present.

Of all things Gregg Allman brought to bear in music and art, it was his voice...

That voice came to silence as part of that unwilling bargain we all make with age. Gregg Allman passed away May 27, 2017 at his home in Savannah, GA, from complications of liver cancer. However, the determination, grit, and angst behind that voice lives on each time the needle drops on side one of At Fillmore East... and announcer Michael Ahern utters his simple starter: "Okay, the Allman Brothers Band". That voice we speak of, counts off the time to detonation of a new way of musical thinking, one that remains today, not as an historic artifact but as a seething, virile message as vital today as nearly 50 years ago.

The story of Gregg Allman is necessarily linked with that of his older brother, Duane and the band they led. The Allman Brothers Band was founded in 1969 in Jacksonville, FL, after starts as the Allman Joys and Hourglass. Duane was de facto band leader and music director who carved out his place in American musical history with his exceptional lead and slide guitar playing. Gregg, a multi-instrumentalist and composer, played Hammond organ and sang. The Allman Brothers Band was released by Capricorn Records November 4, 1969, followed quickly (by today's standards) by Idlewild South ten months later. The recording presented a compelling mixture of blues, country, rock, and jazz not realized previously in this period. These first two recordings, while critically received, did not meet with the commercial success anticipated.

That all change when the band recorded a series of shows at Bill Graham's Fillmore East Auditorium in New York City the spring of 1971. At Fillmore East remains a monument, if not the monument of live rock performance, establishing the Allman Brothers Band as a premiere performance band, setting the stage for dozens of such recordings from other bands of the period, with none ever achieving the same alchemy experienced those nights at the Fillmore. A bright horizon existed for the Allman Brothers Band.

But it was not to be, at least in the band's original configuration. A string of tragedies was to nearly derail the band altogether. October 29, 1971, Duane Allman was killed in a motorcycle accident in the band's home base of Macon, GA. This left younger brother, Gregg as the leader of the band. A meeting was called that the band elected to stay together and tour as a quintet. Eat a Peach (Capricorn) was released February 12, 1972, featuring additional material from the band's Fillmore concerts, Duane's final studio recordings and the emergence as guitarist Dickey Betts as a songwriting force in the band, with his songs "Blue Sky" and "Les Bres in A minor."

Then, on November 11, 1972, in an eerie déjà vu, bassist Barry Oakley succumbed to injuries sustained in another motorcycle accident just blocks from the location of Duane's death a year earlier.

Punch drunk from these two closely experienced losses, Gregg managed to keep the band united, adding to the roster keyboardist Chuck Leavell and bassist Lamar Williams and recording Brothers and Sisters (Capricorn, 1973), which harbored the single "Ramblin' Man," positioning the band at the thick of 1970s rock music, and, more specifically as the originators of what would become known as "Southern Rock." This position was short lived as the '70s rock and roll lifestyle took its toll and the band disbanded in 1976.

Gregg remained active in music as a solo act, releasing the exceptional Laid Back followed by six more recordings over the next 30 years much of which overlapped with his duties with the band. But the Allman Brothers Band was not done. Following an aborted reunion in 1982, the band reformed permanently in 1989. A series of recordings and tours resulted and finally, following a spate of personnel changes, highlighted by the release of founding member Betts, the group attained stability with the addition of bassist Oteil Burbridge, percussionist Marc Quinones and guitarists Warren Haynes and Derek Trucks. This lineup resulted in recording of the band's final studio recording Hitting the Note (Sanctuary, 2001).

Allman and this band, arguably more talented than the original lineup, toured extensively, redefining the genre of Jam Band first realized by the Grateful Dead, and turning it into a business model emulated by other bands old (Little Feat) and new (The Revivalists). The band continued to tour, releasing live recordings, now and then, until the band's final retirement, marked by their final appearance at with the exits of Haynes and Trucks to their own projects.

Before disbanding, ABB celebrated the 40th anniversary of the release of At Fillmore East on in March 2011 with The Beacon Theater, New York, March 2011 (Munckmix) and had their farewell concert captured on The Allman Brothers Band: Live -Beacon Theatre New York City 10-28-14 (Peach Records).

Allman allowed little dust to settle on him, releasing the CD-DVD combination Gregg Allman Live: Back to Macon, GA in 2015. He continued to tour until recently, when he cancelled shows and returned home. After a series of news items stating Allman had entered hospice in mid-April 2017, the singer posted that he was well and resting at home under doctors' orders. Allman had been diagnosed with Hepatitis C in 2007, eventually requiring a liver transplant in 2010.

To a pimply-faced, 12-year old, Southern kid listening to At Fillmore East in the early 1970s, the music provided a reprieve from 45-rpm singles-based music clotting AM radio. Three Dog Night, The Grassroots, and Steppenwolf all had their ABC-Dunhill charm, but remained two dimensional representations of popular music. There was something dramatically missing. What Gregg Allman and his band ultimately did was introduce this same lily-white, middle-class Catholic kid to the blues, the most perfect electric blues recorded. It was at once a starting point and a point of reflection: reflection of where this music came from, what came before Gregg Allman's awesome rock voice, and what was provided after, which was revival.

On the crest of the British Invasion, a phenomenon that finally introduced America to its own music despite a persistent and corrosive racism, Gregg Allman grasped the importance of the music, transformed it with his brother to show us all the beauty and burden of our own cultural character flaws. He did this for fifty years, producing music unequaled. This is and is not the time for our cultural heroes to abandon us. But that is the way that it works. I hope to follow him wherever he goes. Critic's Note: Anno Domini 2017, marks both the 100th Anniversary of recorded jazz, deftly noted by the release of the shellac "Dixieland Jass Band One-Step (A)/Livery Stable Blues (B)," Victor 18255, recorded February 26, 1917 and released March 7, 1917. My father was 18 months old and my mother was yet to be born for two years. It is also the twentieth anniversary of me writing for All About Jazz. The first recording I reviewed for the magazine was Art Pepper's San Francisco Samba (Contemporary, 1997), published December 1, 1997. I am using this present article as part of a series noting my twentieth anniversary with the magazine and paying special tribute to my fellow writers at All About Jazz and Publisher Michael Ricci.