By BEN SCHOLZ
November 1, 2014
Sign in to view read count 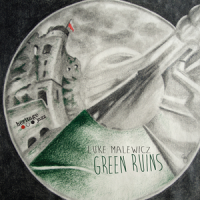 Within the creative music world at large, trombone-led projects tend to occupy a niche within a niche. By far the least common among the three typical "jazz" horn types, 'bone players are forced to contend with a mid to low range instrument that does not tune easily and is usually cast in a supporting role within the band. It comes as no surprise that the list of well known projects by jazz trombone soloists/leaders is short, at least in comparison to the plethora of saxophone and trumpet innovators. However, many landmark recordings such as Carl Fontana's The Great Fontana, J.J. Johnson's Spirit of the Horn, and Frank Rosolino's Fond Memories represent a huge part of our jazz heritage's foundation.

On his debut recording Green Ruins, trombonist Luke Malewicz presents a collection of original compositions with a somewhat unconventional lineup including Richard Moore on tenor saxophone, Andrew Toombs on piano, Tim Seisser on electric bass, and Makaya McCraven on drums. Born in Nowa Sol, Poland, Malewicz immigrated to the United States when he was 20 years old. After graduating from Manhattan School of Music, Luke settled in Chicago and began a busy career performing both stateside and in Europe.

The opening track "Basso Blue" makes no bones (no pun intended) about the fact that this is a trombone led project with its low, rhythmic ostinato featuring Malewicz and Moore. The tune then leads into a fairly straight forward 15 bar jazz samba solo section with an interesting breakdown before the head out. "Heathers" features a trombone melody coupled with a delicate chord structure and piano solo by Toombs. Again, the overall rhythmic feel of this tune is a jazz samba, though McCraven does an excellent job of differentiating between these first two tracks.

The "Sliv" opens with a quick 12/4 pattern that transitions into a floaty ECM feel on the bridge transitioning into a trombone solo. The opening pattern is extremely catchy, and could have warranted an entire tune on its own. Moore plays an angular solo over the groove before the band heads out with the mellower transition. "Rooftops" is a groove ballad that begins with a piano cadence by Toombs before continuing into Joshua Redman sounding tenor sax melody. Seisser performs his first solo of the album accompanied by McCraven; notably playing with sticks in lieu of brushes for the entire piece. Malewicz continues the solo lineup before performing a lush duet melody during the headout.

The title track "Green Ruins" was inspired by "Buildings ravaged and overgrown by time. Crumbled bricks. Climbing vines. These are the green ruins of my past.." In the liner notes of the album, Malewicz pays tribute to his mentors Tim Coffman and Luis Bonilla, as well as family and friends. The inspiration for the final track "My Fair Waltz" reads -"This song is written for my family. I could not have come this far without you." Both songs reflect a strong introspective personality and this sense of vision radiates throughout the entire album.