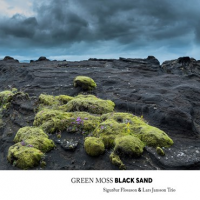 Icelandic alto saxophonist Sigadur Flosason joins forces with Swedish pianist Lars Jansson and his trio in an attempt to describe in music the desolate natural beauty of his homeland.

He says: "The desert-like wasteland holds a singular kind of beauty. Perhaps not pretty in the usual sense of the word, it is beautiful in its stark and rough contrasts. Beauty lies in small things: in the slow-growing moss with its endless hues of color, in the black sand stretching as far as the eye can see, in the fragile highland growth and the fresh spring water quietly streaming forth from beneath majestic lava fields.

"Beauty is in the weather, capable of changing in the blink of an eye; in the stillness and in the storm, in the rain falling at a slant—sometimes almost horizontally; in the sky that has colors you see nowhere else, green when visited by the Aurora Borealis.

"And then, here at the end of the world, there is the ever-present moon."

To paint his musical portrait, Flosason plays in a very different, more searching and personal style than on his two previous Storyville albums with Danish organist Kjeld Lauritsen, Nightfall and Daybreak. Here he performed standards related to the two times of day.

Green Moss Black Sand goes deeper, with echoes of the spiritual seeking of John Coltrane. The music is spare, not a note wasted, matching terse titles such as: "Fragile Growth," "Spring Water," "Lava" , though the underlying threat of seismic volatility keeps listeners on their toes. Along with Sigridur Hulda Sigurdardottir's excellently chosen artwork, it conjures up a feeling of actually being there.

Flosason says: "This music is my dedication to the heart of my country and the people who brought me there, my parents."

On the opening number, "Fragile Growth," the saxophonist waxes quietly rhapsodic, aided and abetted by Jansson's dreamy piano and Thomas Fonnesbaek's bass on a lovely melody that gets under the surface of Iceland's sombre nature. "Serenading The Moon" and "Black Sand" are lighter, singing the country's praises in a slightly more conventional manner. Fonnesbaek takes the lead on the latter at some point, before the leader comes soaring back in to join Jansson on some understated, occasionally almost lighthearted improvisations.

"Green Sky," Flosason's serenade to that mysterious phenomenon, the Aurora Borealis, or Northern Lights, is a particularly intriguing number, busier than the rest, with drummer Paul Svanberg playing a leading role.

"Lava" salutes the volcanic matter once it has settled to become part of the landscape rather than lauding its awesome power as part of an eruption. Similarly, there are no false histrionics on "To The End Of The World" and "Wasteland."

While Jansson's trio is more than equal to the task of interpreting these songs, it would be interesting to hear Flosason perform them with a larger aggregate. Do they have symphony orchestras in Iceland?