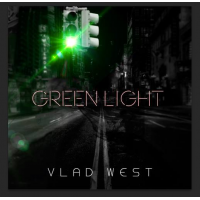 Green Light finds pianist/composer Vlad West (aka Vladimir Sermakashev) working in the same mode as his previous release In My Corner, so much of the "shock of the unexpected" is gone.

Furthermore, that which was shocking before (the very high level of keyboard technique, musicianship and advanced harmony, contrasting with a quite harsh electronic rhythm section) has been intensified, so it must now be heard as West's modus operandi —at least for recording.

Since "the unexpected" will happen only if one listens to West's recordings in order, the question is now whether Green Light can stand alone as someone's first exposure to West's music. The answer is most definitely yes, and for any number of reasons.

First, it is quite apparent that West is having a lot of fun. The thirteen tracks are all relatively short (half under three minutes, with the rest mostly around four minutes), so there are no extended flights of fancy, but rather a compressed intensity where each track's stylistic and emotional mood is deeply explored in that short time.

The cumulative effect at feels like a history lesson of jazz piano playing styles, including locked hands, exposed repeated dissonance, ballad playing, classical style, funky, walking bass, "string" accompaniment, harsh playing, pretty playing and quotes ("Bye, Bye, Blackbird," "Oh My Darling, Clementine"). It is all there to enjoy. Those coming to this album from the jazz side will find themselves nodding knowingly at this or that particular figure, while those coming from the pop side will recognize many of the rhythm and bass figures.

"Robins' Dream" is dedicated to Robin Williams who, in "Moscow On The Hudson," played the character based on West. It has the most overtly jazzy rhythmic accompaniment, and demonstrates how interesting a composer and player West really is. A video collage of the tune showing the connections between West, Williams and the movie can be found here.

At the other stylistic end is "OG," which has lots of dissonance and a rather harsh drums and bass in a rock rhythm (then again, "Clementine" sneaks in).

Green Light ends with "Never Too Late For Roses," where West shows his romantic side, opening with a solo piano declamation and improvisation, which has quite a few harmonic surprises. Strings accompany the recap of the tune proper, and the track ends with ascending arpeggios leading to a very pretty chord.

When taken for what it is, rather than what is expected, Green Light supplies many interesting musical moments, along with much honest emotion.

Ring For Swing; Robins' Dream; No Hard Feelings; Red Carpet; MF; Gypsy Doll; Green Light; Someone Is Waiting For You; If Clouds Will Disappear; Autumn Bells; OG; Up To You; Never Too Late For Roses.