By ERNEST BARTELDES
January 14, 2008
Sign in to view read count 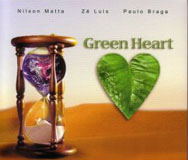 "Antonio Carlos Jobim was concerned about the environment way before anyone else was talking about it," said Brazilian-born reedman Zé Luis halfway through his mini-set at New York's Joe's Pub, in December 2007, during the release concert for Green Heart, dedicated to the preservation of the Amazon Forest.

With that thought in mind, Luis went on to play "Caminhos Cruzados," an early Jobim-Newton Mendonça tune whose original lyrics say that the only cure for a broken heart is to fall in love again. On the disc, he delivers a more intimate version, backed solely by electric guitar and triangle; live, he chose to perform with a quartet. The result was not very different, as in both the approach was similar to that of its composer, who often played the tune as a soft instrumental number, using a flute to convey the song's melancholy message.

Another Jobim piece included both on disc and live is "Wave." Once again, a more familiar format is chosen on the disc—in deference to Brazilian fans—but live, the group took advantage of the song's groove to improvise more freely, especially guest guitarist Toninho Horta, who one wishes had been on hand for the studio version.

On "Assum Preto (Black Bird), a song written by Luis Gonzaga, one of the pioneers of baião, the words speak about the plight of the people who live in areas where droughts are commonplace, causing workers to migrate south in search of work. "That situation, commented Zé Luis, "was mostly caused by the devastation of the Atlantic forest by the Portuguese colonists in the 16th Century. His slow arrangement added poignancy to the heartbreaking tune.

The original track "Paraty," a tune written in honor of a historical city in the state of Rio de Janeiro, features the "dynamic duet" of bassist Nilson Matta and acoustic guitarist Romero Lubambo (two thirds of Trio da Paz); at Joe's Pub, Matta delivered a more up-tempo version via a trio with pianist Klaus Muller and drummer Mauricio Zotarelli.

Green Heart is a very satisfying showcase of Brazilian jazz that is both nostalgic and contemporary, a comprehensive view of the country's evolution.