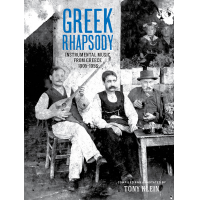 A couple years back, Tompkins Square issued an unforgettable box set called To What Strange Place: The Music of the Ottoman-American Diaspora, 1916-1929, which collected a type of Eastern music that had gone unanthologized, largely because it came from places long since gone from the world map, played on instruments to which most Westerners have never paid much attention. Name three oud players. I dare you.

Greek Rhapsody (Dust-To-Digital) surveys rebetika, the international style prominent among Greeks throughout the Ottoman Empire. The music collected here was recorded from 1905-56 in Greece,Istanbul, the United States, and even a German prison camp during the first World War, and the set largely (but not entirely) steers clear of vocal music. This is the first real anthology of this music, and it delves into its history on two discs and gorgeous 152 page hardbound book. Dust-To-Digital as usual doesn't mess around. They specialize in landmark releases, and this is certainly one.

Compiler/annotator Tony Klein definitely has a thesis about the beginnings and development of rebetika, and his historianship is formidable (and he writes well). The records collected here are themselves rare. The photos and other ephemera collected together in the book flesh out the notion of a living, active music scene spread over continents, even if it never made itself known much past its own community.

The music is much more diverse than is often the case with these collections, but that it takes in fifty years of material makes that the case. Klein goes into depth about the instruments in the recordings, some of which (clarinet, guitar, accordion, mandolin, mandola, piano, violin) are common to us. But the variety of arcane stringed instruments featured throughout warrants explanation, and we fortunately get it, complete with photos. In some of these recordings, there is also what Klein calls "yodel whistling," which is one of the most haunting things imaginable.

Rebetika isn't exactly the pep-steppin' stuff of My Big Fat Greek Wedding anymore than klezmer music is the Jewish wedding music from movies. It's the regional stuff that hits harder, cuts deeper, and finds its edge by what Americans would think of as a high lonesome crying sound. The melodies are distinctly Eastern, often but not only played on stringed instruments. Some things sound Arabic, others more akin to klezmer music (especially when violin or simbalom, a sort of Eastern European hammer dulcimer, is prominent). Since the original recordings are rarely if ever in good shape (Klein addresses these issues at length), even the most painstaking digital restoration (and this is) cannot remove the aural antiquity from the listening experience.

(Unlike To What Strange Place, Rhapsody places its focus almost exclusively on instrumental music, which will make it an easier listen for some ears.)

It is unlikely that everyone who likes Rhapsody will like all of it. Occasionally, the condition of an original recording is rough enough to be distracting. But there are a few musicians who are are especially startling, and it's difficult to think there will be dispute as to who they are. Violinist George Gretsis—it is his record "Greek Rhapsody" that opens and provides the title for the anthology—is a master. His technique is virtuostic, and he's as expressive as they ever came. Guitarist Spyros Peristeris only recorded four songs (all included), but there's an entire world in them. Fans of John Fahey will be transfixed by his playing, which seems to have equal footing both in bouzouki and standard guitar technique. Of all the players heard here, he is the one whose work sounds the most akin to modern music, making his tracks a likely gateway drug for the curious. Violinist Alexis Zoumbas, who recorded prolifically between 1926 and 1930, is represented here by "Arvanitiko," a particularly showing of expressive violin firepower, with only a simbalom for accompaniment, recorded in New York in 1927. This track makes one wish for a few more recordings of him. The dazzling multi-instrumentalist Manolis Hiotis is represented on a few tracks as well, and he too warrants more inclusion that he got here.

Why Greek Rhapsody is the first anthology of its type is a mystery. There's no shortage of compelling material here, and it would seem these 42 tracks are not all there is that we'd want to hear. It's quite a first step into an old world.