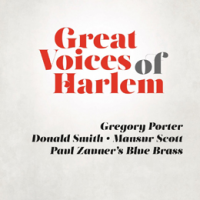 Scott gets the lion's share of credits, with appearances on seven tracks to Smith and Porter's four apiece (all three share vocals on Horace Silver's "Peace"). Porter, a Grammy-winning international star, is the name likely to attract the most attention for this release. Smith—the brother of Lonnie Liston Smith—and Scott have been around a lot longer but without attracting so much attention.

The album bursts into life with Porter's soulful take on "Moanin.'" The song also gives trombonist Zauner and the rest of his band a chance to shine—it's obvious from the start that the players are not only sympathetic to the needs of the vocalists but also capable of some fine ensemble and solo performances. Martin Reiter's punchy piano solo on this track is just one shining example.

"Peace" and "Expansions" share the same lyrical concern. While "Peace" addresses its subject in ballad style with Porter, Smith and Scott each taking the lead, "Expansions" travels the harder, funkier, road. Smith takes the vocal—appropriately, as his brother wrote the song and he sang on the original 1974 recording—and the Zauner band's backing, especially Howard Curtis' drums and Wolfram Derschmidt's bass, captures the '70s vibe.

Porter may be the youngest singer here, but he displays superb judgement, control and vocal finesse every time he appears—"Somewhere Over The Rainbow" is exquisite, possibly one of the finest performances he has yet committed to record. Smith and Scott are characterised by a greater tendency to let things blow—the impact is immediate, the power both men display is intense. Smith's heartfelt screams on "Expansions," Scott's gritty honesty as he sings of his time in prison on "Doing Hard Time," are striking examples of that power. On "Watermelon Man" the pair's joyously raw delivery destroys any pretence that the song is about a fruit seller. Their commitment is impressive, although Smith's rather over-the-top vocal on "My One And Only Love" would have benefitted from a touch of Porter's control.

Moanin'; Intro Peace; Peace; Expansions; Somewhere Over The Rainbow; Doing Hard Time; Stella By Starlight; Watermelon Man; My One And Only Love; Days Of Wine And Roses; Mona Lisa; Song For My Father.