By DOUG COLLETTE
November 26, 2017
Sign in to view read count 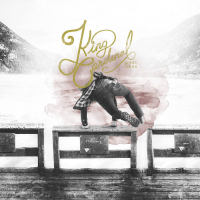 It's going to take more than one album to restore some legitimacy to the glib categorization of 'Americana," but with Great Lakes, King Cardinal at least paves the way for that movement. And does so without succumbing to self-conscious gestures of authenticity either.

Which isn't to say it's wholly original by any means. But this band led by Brennan Mackey is eager to leave its influences behind. Why else make "Holy" the opener and allow the leader to forsake the frail falsetto so early in the record and render moot fatuous comparisons to genre peers? Or juxtapose that slightly precious track with the markedly saltier "Seventeen," where McKay's full-throated singing is punctuated with Ben Waligoske's guitar.

That first hint of King Cardinal's unity fades to another example of its collective camaraderie in the form of the deceptively forlorn "Gasoline." The wan despair below the surface of that song is offset with twinkling pedal steel, again from Waligoske, plus Texanna Dennie's sinuous vocal harmonies. Her voice is prominent again on "Organ," illustrating a group versatility that transcends easy labels, as it also manages to do on the seemingly autobiographical closer "Better."

The instruments of saxophonist Larry Folz and trumpeter Jake Boldman are used too sparingly for their own good on Great Lakes. That said, when the horns are sufficiently prominent, as on "Boulder," their charts aid in lifting King Cardinal past the obvious roots in folk and country music, to the vintage New Orleans inflected sounds of the Band. By the time, "Trouble" rolls around, such sing-song melodies have turned wearisome on the record, as does some more steel too conventional for its own good.

But Dennie's lead vocal on "Chicago," framed by Mackey's deliberate plucking of banjo, makes for a refreshing change of pace, though, especially as it echoes deeper roots in the form of Appalachian holler (if a bit tentatively). The titular leader of King Cardinal will thus need to constantly push himself and the octet he leads, if only to insure they don't backslide into formula. "Standing Down" constitutes one reliable route to take because its whisper belies an earthy blues undercurrent, not to mention an uncommonly shadowy air.

Yet if Great Lakes suggests anything, it is that Brennan Mackey and company do not fear adventure: the longest tracks here are the best. And when the group embarks on the next project, producer Ted Young should perform the exemplary engineering and mixing he did here as another means to enhance the listening experience and make it worth repeating.