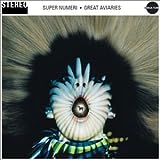 If you judge a band by the instruments they keep, Super Numeri is an enigma. Between the three of them, the core members of Super Numeri (Pop Levi, Karl Webb, Snap Ant) play twelve instruments; their ten guests play strings and percussion. A confusion, most certainly.

Despite the futuristic graphics on the cover of Great Aviaries, a very strong retro flavor pervades the record. Those familiar with Teo Macero's productions for Miles Davis during his fusion era (eg. Bitches Brew, In A Silent Way ) will immediately recognize a similar approach here. It's that idea of an extended instrumental jam pushed through effects and then assembled into a pastiche-like whole, which is practiced here from start to finish. Whether or how much the jam was edited remains a mystery, as it was on much of Miles's work. Perhaps not at all.

Great Aviaries regularly relies on a beat, though the rhythm remains continually in flux. But Super Numeri is no simple jam band; it's significantly more sophisticated and experimental than the flaccid wankers who predominate in that style. The delicate tinkering at the start of the exceptional beat-less "Otter's Pool," for instance, brings about a sense of mystery and aquatic imagery. "Leisure Lakes," while relaxed in tone, conveys darkness and suspicion. The opener, "The Electric Horse Garden," bears a strong resemblance to the post-rock explorations of Tortoise circa TNT.

For what it's worth, just about every literate review of this record will probably include references to Miles, the jam, and post-rock. It's hard to avoid the obvious. But don't get caught up in the idea that Super Numeri is derivative or stale: not so. Regardless of its usually sonorous tone, Great Aviaries has some moments of real tension—for example, the military square waves of "Beaks." In the end, accessible or not, this is art music. And a rarified form indeed.

Visit Ninja Tune and Super Numeri on the web.