By CHARLES WALKER
February 14, 2011
Sign in to view read count 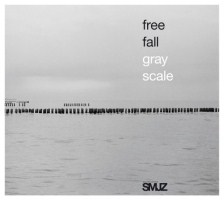 For years now, multi-reed instrumentalist Ken Vandermark has been a consistent, if idiosyncratic, devotee of the jazz canon. Musically coming of age in the internet era, however, his taste reflects the widespread availability of previously neglected recordings and the resulting reorientation of what exactly that canon includes. Explicit dedication of Vandermark 5 tracks to Curtis Counce or John Carter have functioned as a rather oblique way of stating his case, but groups like his Joe Harriott Project or School Days have allowed him to directly explore the aesthetic of other influential, but often forgotten figures. The clarinet/piano/bass trio Free Fall, heard here on its fourth recorded outing, falls firmly into the latter group.

Though the group is ostensibly a tribute to clarinetist Jimmy Giuffre's album of the same name (Columbia, 1962), Gray Scale finds it moving well beyond the dynamic range of its namesake. Giuffre's album was an exercise in suggestion, exploring microtones and timbre in two or three minute slivers of muted abstraction. It is undoubtedly influential, and at the time it offered a revolutionary opening of space within the realm of free improvisation. But here, Vandermark, pianist Håvard Wiik and bassist Ingebrigt Håker Flaten move beyond suggestion into outright declamation, in the process arriving at a vibrant, concise update on this unusual trio format.

One of the strongest dynamic decisions is retain that trio instrumentation at all times, unlike Giuffre's tendency to split off into solo or duet statements. Of course, this allows them to dial up the energy at times, launching into up-tempo, tripartite spirals of melody. The opening track, "Lividus," almost seems a kind of reading of the literature on this type of work, as if to signal their facility with similar workouts before they move into other realms. More interesting, perhaps, are the moments when the instrumentation dovetails, the unique sonic qualities of each interlocking without overstepping bounds. Over halfway through "Ravus," for instance, the bass clarinet and arco bass find a droning common ground just solid enough to allow Wiik's stairstepping, skeletal solo to build enough momentum for the track's satisfying conclusion. Vandermark's frenetic, circular swirls of sound halfway through "Caesius," which could become mired in stasis in a solo recital, are instead propelled onward by the sharp, staccato jabs of piano and bass.

Most surprising, perhaps, on Gray Scale is not the sense of exploration or the high level of communication among its participants. Those are the calling cards for all three of these musicians, both here and in their work elsewhere. Rather, it is when all the ostinatos, the trills and soft, lower-register slap-tonguing coalesce into an unforced moment of emotional heft: the haunting melodic figure Vandermark worries throughout "Argenteus," the throttling, draining conclusion to "Cinereus," or the way they almost can't help themselves from settling into a near-Monkian blues feel on the last half of "Opacus." The experimentation is what makes it interesting, but these are the moments that keep it eminently relistenable.