By DAN BILAWSKY
November 12, 2012
Sign in to view read count 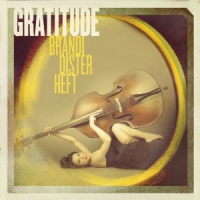 Canada has had its fair share of fine female jazz exports over the past few decades: piano-vocal crossover star Diana Krall; trumpeter Ingrid Jensen and her equally fabulous saxophone playing sister, Christine Jensen; and pianist Renee Rosnes have all made their mark below the 49th parallel. With the release of Gratitude, bassist Brandi Disterheft is poised to join their ranks.

The Vancouver-born bassist first garnered attention in Canada with her Juno Award-winning Debut (Superfran, 2007) and its well-titled followup, Second Side (Justin Time, 2009), but she's upped her game with Gratitude. Disterheft's move to New York City proved to be a game changer, as it put her in contact with some of jazz's finest practitioners who ably assist her in raising the bar on this originals-heavy affair.

Disterheft wisely uses her A-list accompanists in various groupings and settings, which helps to keep things interesting throughout. She deals a winning hand of blues in piano trio mode ("Blues For Nelson Mandela"), makes it into a foursome with the addition of Anne Drummond's spellbinding flute ("But Beautiful"), uses all of the harmonic horn colors at her disposal on a beautiful lament written to honor her cousin who lost his battle with cancer ("Gratitude"), and jettisons her support crew for an all- too-brief solo bass take on a Gershwin classic ("The Man I Love"). The full band, sans Drummond, has some fun with Disterheft's "Open," which would have fit in nicely in Art Blakey's playlist of the '60s, while the date's piece de resistance comes in the form of "Portrait Of Duke," a piano-bass-trumpet dialogue that finds Disterheft, trumpeter Sean Jones and drummer Gregory Hutchinson in high spirits.

Disterheft's skills as a bassist and composer are clear at every turn on this outing, but her vocal work can be a tougher sell. Her French language vocals on "Le Regarder La Recontrer Encore (Rendez-Vous Indesirable)" are superb, but her vocals on "But Beautiful" fall flat on the emotional spectrum. The funky "Compared To What" is musically and vocally solid, and focuses on the groove chemistry between Hutchinson and Disterheft, but proves to be a bit of a stylistic faux pas. Disterheft deftly works a variety of styles into a cohesive whole here, but socially conscious funk just doesn't fit in.

While the album might have been stronger with the removal of a vocal number or two, Disterheft doesn't disappoint on the majority of the material. She's a major talent who won't stay under the radar for very long. Gratitude features some outstanding music and it should be a boon to her career.