By DOUG COLLETTE
August 9, 2015
Sign in to view read count 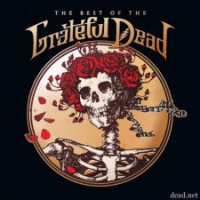 As with so many aspects of the Grateful Dead oeuvre, there's more to The Best of the Grateful Dead than meets the eyes and ears. An embossed cover the glossy likes of which don't usually adorn such compilations, plus the presence of sound arising from brand new remastering done on the bulk of the thirty two tracks, are only the most obvious touches to a collection that may surprise even the most (tie)dyed-in-the-wool Deadheads.

Who may, in fact, eschew any attention to this two-CD anthology precisely due to its concept: a cross-section of studio recordings from a band who defined their legend by live performance. But if it's true the Grateful Dead learned to dislike the confining environs of the recording studio, they did teach themselves to master its attributes, albeit through an admittedly trial and error process. Working under the disparate auspices of producers including Keith Olsen (Fleetwood Mac) and Lowell George (Little Feat), as well as on their own in self-created recording studio spaces (In The Dark, Arista 1987), a unit perhaps not known for its self-discipline learned the value of precision was as great as that of an expansive approach to improvisation.

The self-indulgent likes of their second album, from which comes "Born Cross-Eyed," Is just one of the initial clutch of psychedelic kitsch on disc one that abruptly ends with the acoustic simplicity of "Uncle John's Band." Hearkening to the group's early days as bluegrass and jug band artists, that lead track from Workingman's Dead (Warner Bros., 1970) isn't the somewhat dated (Farfisa organ!) likes of, "The Golden Road to Unlimited Devotion." but it is fully representative of the Grateful Dead's joie-de-vivre on its own terms. And it marks the point the band improved their harmony vocals tremendously, carrying over into the exquisite American Beauty (Warner Bros., 1970), released later that very same year.

The same can't be said of numbers that would eventually come to be staples of their live repertoire, such as "Dark Star" and "St. Stephen." virtually unrecognizable in such abbreviated forms, it's nevertheless enlightening to hear the initial formulations of songs such as those composed with lyricist Robert Hunter as well as as rhythm guitarist Bob Weir's "Estimated Prophet." It was no small accomplishment to translate the Grateful Dead's craft at work in the studio on material that allowed for opening up the tune on stage. The magnum opus "Terrapin Station" became a piece markedly different outside the album of the same name as some more baroque movement(s) were excised, while others, including the percussion section, were restored to their rightful prominence.

It's one of the great ironies of the Grateful Dead history that as their aversion to the recording process grew, the found mainstream success with "Touch of Grey," the sing-song likes of which guitarist/vocalist Jerry Garcia and Hunter (or the other composing teams within the group's community) rarely if ever composed and in fact the group seldom played in concert, perhaps because it was the recognition arising from its popularity, accented by an MTV video, that brought their audience to critical mass with an infusion of 'outsiders.' The track does, however, encapsulate the band's polished latter day sound better than the faux blue-eyed soul of "Far From Me," contributed by keyboardist/vocalist Brent Mydland who otherwise inspired the band for a full decade (and wrote superior material in the form of "Blow Away").

And just as the band's tours thus became a weight to be collectively borne due to the larger than ever influx of road warriors, not all of whom were so deeply devoted to the music, so did the Grateful Dead's creativity suffer, at least in terms of the prolific nature that bore much of what constitutes CD one. "Eyes of the World" and "Scarlet Begonias" became warhorses of their own in concert, even more than the economical beauty of "Ripple," while "Estimated Prophet" and "Throwing Stones" were evidence of Weir's heightened profile at a time the Garcia/Hunter axis struggled to produce.

Yet the final products of the latter's collaboration were gems of a stellar sort that validated their long-standing partnership, effectively allowing "Standing on the Moon" and "Foolish Heart" to become personal statements on the part of both men and, by extension, the listeners who truly embraced them, whether or not on the final recording the aforementioned em>Build to Last (Arista, 1989).

Equally informative and insightful, Blair Jackson's essays on each track illuminates its significance and, in so doing, at least to some degree mollifies what appear to be some omissions in the track-list, as curated so discerningly by archivist David Lemieux. But, like the setlist from a show, the song titles don't tell the whole story: The Best of the Grateful Dead is an absolutely necessary release to aid in commemoration of the half-century milestone of the formation of the iconic band and in it's own way serves to illustrate, even if only by process of elimination, just how multi-faceted was their career.