By DOUG COLLETTE
October 31, 2010
Sign in to view read count 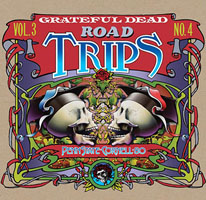 Taken from two college stops on the Grateful Dead's spring tour of 1980, the latest edition of Road Trips is a three-disc set that, like the very first entry in the series, features the band's lineup with Brent Mydland.

At this point a year into his decade-long tenure with the iconic group, the keyboardist's presence helped in various ways to consolidate a new chemistry within the Dead. Neither scintillating nor celebratory, Vol. 3 Number 4 is nonetheless worth hearing as a document of the band, close to its fifteenth anniversary, eminently comfortable in its own collective skin.

Material from the Dead's just-released studio album, Go to Heaven (Arista, 1980), appears early in this composite production of successive Penn State and Cornell University shows forged by David Lemieux and Blair Jackson. The group takes its time throughout the near-three hour playing time, not much more or less so in the later segments than on rhythm guitarist Bob Weir's collaborations with John Barlow, such as "Lazy Lightning/Supplication," or the contributions from guitarist Jerry Garcia and lyricist Robert Hunter in the form of "Althea."

It is no surprise, though, that slightly more extended improvisations and multiple segues appear as the set progresses. Hearing "Wharf Rat" emerge from the instrumental "Space" segment only heightens its cinematic quality, while Garcia sings in a vulnerable tone that enhances the vivid lyrics and the poignant melody to which they are married.

"Shakedown Street" is an unusual and lively coupling with "Bertha," itself a reminder of how deep the Grateful Dead's repertoire was at this time: the latter original, almost a decade removed from its debut on Grateful Dead (Warner Bros., 1971) bookends this show together with "Peggy-O," a homage to the group's traditional folk roots.

On this Dan Healy recording (mastered with remarkable clarity through the sonic spectrum by Jeffrey Norman), it's a marvel to hear how drummers Bill Kreutzmann and Mickey Hart pivot around each other, not to mention bassist Phil Lesh, whose transitions on "Jack Straw" impart a bounce to the motion of the band in action. Mydland's piano and organ further lightens and brightens the sound, while his use of synthesizers on "Feel Like A Stranger" is restrained. And, as evidenced on "Black Peter," Mydland also fortified the group on vocals.

In their own vocal phrasing, Garcia and Weir betray obvious debts to Bob Dylan and the clarity of the pair's guitar work is equally complementary, especially when the Dead stretch way out near the end; during the interval comprised of "Terrapin Station" and "Playing in the Band," two portions of the latter are separated by roughly thirty to forty minutes. During such interludes, the Grateful Dead sound, as Blair Jackson describes in his liner notes, particularly far removed from—not to mention contrary to—the musical tenor of the times, most notably punk and New Wave rock.

Still, there is no sense of complacency emanating from the Grateful Dead's playing here; rather, a quiet confidence that permeates Road Trips Vol. 3 Number 4 from start to finish.