By DOUG COLLETTE
October 25, 2009
Sign in to view read count 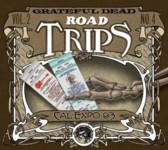 The Grateful Dead archive series Road Trips was conceived to include highlights of a given period in this iconic band's history, and Volume 2 Number 4 presents a streamlined take on two shows from the Cal Expo in 1993. In stark contrast to the cookie cutter amphitheatres the group was finding itself forced to play to accommodate their growing audience at this point in their history, the open-air atmosphere no doubt contributes directly to the overall vigor with which the Grateful Dead plays. The spotty sound quality here compels the audio disclaimer on the back cover, but doesn't seriously negate the impact of the playing over the course of the three compact discs.

The septet gets off to a jubilant start through the tight rhythm work of Bill Kreutzmann and Mickey Hart on "Samson and Delilah:" noticeably routine in their tandem playing in the latter year's of the group's performances, here the two prod each other into increasingly intricate patterns. That concentrated approach serves the stop and go beat of "Walkin' Blues" equally well as guitarist Jerry Garcia and bassist Phil Lesh simultaneously interweave melody and rhythm back and forth.This action, however, is in direct contrast to the lethargy within "The Same Thing."

Previously a member of the showy California band The Tubes, Vince Welnick used his electric keyboards to contrast the spooky MIDI excursions by Jerry Garcia and Bob Weir and, in so doing, lent a bright carnival like atmosphere to the sound of the group, as on (appropriately enough) "Here Comes Sunshine." Perhaps not the most technically gifted or intuitive keyboardist the Dead ever employed, Welnick nevertheless had an ability to find his level within the core of the group's collective improvisations, so that, as on "Deal," he's generally in the flow without being intrusive.

Garcia's level of engagement with the Grateful Dead during its later years is often overstated but remains a crucial barometer of the band's improvisational acuity during the '90s. The vocalist/guitarist/composer's strain is obvious as he sings, for instance, "Crazy Fingers." Yet when he plays, Garcia's energy level invariably rises to elevate his own musicianship and that of the group. There lingers, nevertheless, a sense that everyone in the band but Garcia is being overly careful in how far afield to take an improvisation such as the first appearance of "Playing in the Band." In addition, while it's a good idea in theory to have Phil Lesh sing something like his own "Box of Rain," thereby skirting the predictable pattern of alternating Garcia and Weir upfront, the bassist's difficulty in maintaining the pitch in his voice is painful and quite unlike his otherwise unerring instrumental acuity.

Within an unusually vivid array of photos within the standard Road Trips graphics, Blair Jackson's historical essay tends to gloss over such miscues, but he's able to maintain an accurate overall perspective. His discerning take on the string of segues that comprise the second of the two main discs and the bonus disc clearly reflects his admiration for the Dead. He quite astutely notes how, through their later years, the Grateful Dead continued to interweave vintage material ("Ramble On Rose") with novel selections ("Liberty") to maintain their level of inspiration. If Road Trips Vol. 2 No. 4 suggests anything, it's that the Grateful Dead wouldn't rest until it simply had no choice.

CD 1: Samson and Delilah; Here Comes Sunshine; Walkin' Blues; Deal; Box of Rain/ Victim Or The Crime/Crazy Fingers/Playing In The Band/Rhythm Devils. CD 2: Corrina/Playing In The Band/China Doll/Around and Around; Liberty; Shakedown Street; The Same Thing; Dire Wolf; High Time; When I Paint My Masterpiece. Bonus CD: Picasso Moon/Fire On The Mountain; Cassidy/Uncle John's Band/Cassidy; Gloria; Broken Arrow; Ramble On Rose; Stuck Inside of Mobile with the Memphis Blues Again.