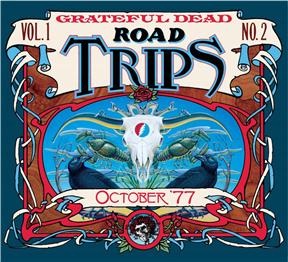 In conceiving Road Trips, the first archive series to emerge after the Grateful Dead initiated their business partnership with Rhino Records, the intent was to highlight significant phases of the band's performing career without impinging on previous reissues, in particular the highly esteemed Dick's Picks series. To that end, the basic premise of Road Trips is not complete concerts but rather selections from a specific phase of Dead history.

The second installment in the first volume focuses on the fall of 1977 when the band returned to the road with a collective vigor after completion of two time-consuming projects: The Grateful Dead Movie (1976) and the Terrapin Station (Arista, 1977) studio recording. Portions of this set cull ever-so-slightly from previous DP's, but the bulk, as is the intent, is made up of never before officially released performances finding the Grateful Dead in their favorite milieu—the musicians stretching out into a series of lengthy improvisations and segues that contain their (and the band's) own peculiar logic.

Because of the way it captures the Dead luxuriating in expansions of all manner of their material—and often on unusual choices—the bonus disc is well worth listening to as well. Hopefully this will be a permanent feature of the (exclusive) on-line edition of Road Trips Vol. 1 No. 2 package, because, as with the best Grateful Dead concerts, it is a series of brilliant revelations.

Not surprisingly, the peak experience is the conclusion. Instead of rendering "Wharf Rat" as its usual set piece, Jerry Garcia leads the band through thirteen plus minutes of this evocative tune. In his vocal inflections, the late and largely misunderstood rock icon touches every level of emotion in lyricist Robert Hunter's vivid depiction of an encounter with a forlorn but hopeful homeless individual, and subsequently leads the group through two instrumental breaks that are equally full of nuance and drama.

As with the best improvisational music, though, transitions create sharp relief, and here it's the gentle segue into "Sugar Magnolia," from the same 7 October, 1977 show. The Grateful Dead move from the somber reflection of the one tune into the absolute jubilance of the second, as the whole band lets loose to extract every bit of high-spirited joy possible from the oh-so-familiar song. It's a vibrant performance, the exact counterpart of what immediately preceded it.

Similar epiphanies occur elsewhere here—as in the slow motion morph of "Scarlet Begonias" into "Fire On The Mountain" for instance—as well as on the other two discs of Road Trips Vol. 1 Number 2., but they're just not such accurate encapsulations of the unique improvisational character of the Grateful Dead. Much of disc one, for instance, is purely professional, not exactly undistinguished by any means, but nowhere near so memorable as what's contained on the bonus CD. "Sugaree" goes almost eighteen minutes and "Mississippi Half Step Uptown Toodleoo" finds the group pushing the twelve-minute mark with virtually no wasted notes to speak of either collectively or individually. It's notable throughout such numbers how the band sounds as they play because, unlike the first "Road Trips" which focused on the novel sonic textures of Brent Mydland on keyboards, this set emphasizes form and function.

Garcia's use of guitar effects is judicious and evocative, without sublimating his tone. Bob Weir's rhythm work is comparable to his playing prior to the group's hiatus of two years prior, muscular enough to provide nearly as much as navigational finesse as bassist Phil Lesh. Lesh plays in such an unpredictable style, he prevents drummers Bill Kreutzmann and Mickey Hart from merely playing in tandem and they continually accent each other, both on and off the beat. Keyboardist Keith Godchaux had come to be almost invisible at this point in his tenure with the Dead, and would leave within a little over a year later, but when his piano does appear, as on the heartrending "Brokedown Palace," it remains in delicious contrast to Garcia's lead.

Almost but not quite matching the expert flow of the third disc, there's an escalation of intensity that carries from disc one to disc two. Beginning with "Help On The Way"/"Slipknot"/"Franklin's Tower," Garcia again sets the tone by the way he sings Hunter's imagistic lyrics so forcefully on the former. He raises the level of performing for the rest of the band, so that Weir aggressively takes command on "Playing In The Band" as it moves into a truncated "Drums" segment and then "The Other One." Though culled from two different dates, the dynamics are seamless here, again demonstrating how expertly, not to mention intuitively, archivists David Lemieux and Blair Jackson know their Grateful Dead music.

Road Trips Volume 1 No. 2 may not impress by its sonic depth, as did its predecessor, but audio quality is always relative when discussing thirty-year old recordings. Nevertheless, it's worth mentioning the mastering skills of Jeffrey Norman, not to mention the recording acuity of Betty Cantor Jackson, particularly when absorbing all that's happening during a thirteen-minute version of the doleful "Black Peter," just before the band slips into Chuck Berry's "Around And Around," all of which occurs after the grandeur of "Terrapin Station."

The Road Trips series is evolving as an accurate reflection indeed of the Grateful Dead's inimitable approach to performing. In his essay within the booklet, Steve Silberman does an expert job chronicling the chronology within which these shows were recorded as well as detailing the workings of the band's internal mechanics at that period. Nevertheless, author and radio host David Gans' erudite essay "Grateful Dead Concerts Are Like Baseball Games" offers very apropos insight on the unpredictable and often-erratic nature of Grateful Dead live performances, such as are included here, that would be an especially good read before during and after hearing this package. Still, no matter how eloquent the description or acute the insight, reading about this band in action is no substitute for bearing witness to the experience itself.