Grateful Dead: From the Archives and From the Road

An old saying 'There is nothing like a Grateful Dead concert' is still true today--in more ways than one.

Originally spoken as a wondrous compliment to the seminal San Francisco band and its followers, the phrase eventually came to have multiple meanings as the group, its fanbase and its music changed. Judging from The Dead's recent two-night stand at the outside Boston, as well as two archive cd packages that clearly illustrate the contradictions of The Dead experience, the ambiguity is still there.

But, credit where credit is due, to a group of musicians who became larger than life almost from their inception. Soldiering on in various forms since the death of founder member/figurehead Jerry Garcia is but a continuation of the perseverance of the band as its personnel has evolved during its extended history (The Dead celebrate their 40th anniversary in 2005). And their approach to playing live, as evidenced July 30 and 31st at the Tweeter Center, remains the essence of serendipity: even today the group is convinced that, as they invoke their collective muse, any given song has the potential to open them up to the glorious experience about which their fans rhapsodize. You might argue that's clearly not the case based on the contrasting song selections from the two nights, a perception only reinforced by the wide disparity in the recordings contained on Rockin' The Rhein (Rhino) and Dick's Picks Volume 32 (Grateful Dead). The sound quality of the performances is starkly different, a you-are-there ambiance on the former and a virtually bass-less mix on the latter. Even the cd packages give a wholly different impression, accurately representing the music contained therein: Rhein is a colorful fold-out digipak with ornate graphics and actions shots of the band during is 1972 show, while #32, like most of the entries in the archival series, has rather generic artwork and little technical info(apart from a somewhat apologetic back-cover note from engineer Jeffrey Norman) in its double-disc jewel case.

There's a distinct difference in the band's playing as well, not surprising given the decade interim between the two shows in question. The Dead were on a roll much of the Seventies, having learned the value of economy by dint of the two studio albums that began the decade— Workingman's Dead and American Beauty —as well as having a wealth of new original material to work with; little wonder, Rhein is the fourth title from this period, following the initial official Europe '72, Hundred Year Hall and Steppin' Out (not to mention the titles in the late Dick Latvala's archival series). The Eighties, by contrast, found the band floundering at regular intervals—their 1987 mainstream hit, "Touch of Grey," arguably notwithstanding—in part because of Garcia's recurrent health problems, but also because they were not coming up with inspired original material to fire them up as musicians

Set lists in print can't tell the story of a show, but in the case of this 1982 Alpine Valley concert, the rather humdrum reliance on rootsy covers such as "CC Rider" and "Beat It on Down the Line" confirms the impression of a band moving on its own inertia. To be fair, the effortless transitions on segues such as "I Know You Rider"/China Cat Sunflower" are the work of pure group instinct, but that particular coupling has nothing of the joyous sense of discovery in a similar mating of "Not Fade Away"/"Goin' Down the Road Feelin' Bad" on the other cd set. And perhaps it's not fair to level a criticisms at The Dead on that score, because, again, you have to marvel at the ease with which they maneuver as a group: in perhaps a deliberately lazy way, this may have very well been a wilful a means of embodying the summer season at what became on of their favorite venues, beginning right away with the imagery in the opener "The Music Never Stopped."

Theories might then abound to explain the night-and-day difference between the first and second night shows in Massachusetts, appearances early in the second leg of 2004's Wave That Flag tour. A capsule summary might suggest the best show of the season and the worst show of the season and those results seem grounded in the choice of material: July 30 was a compendium of vintage material, right from the triptych of "Help on the Way"/"Slipknot"/"Franklin's Tower"(off the much underrated Blues For Allah that sent a charge through the audience, to the virtually non-stop marathon second set, including "Terrapin Station" in its entirety on to a string of songs that bring you right back to the Dead's heyday in more ways than one: "St. Stephen," "The Eleven," "Scarlet Begonias" and "Fire On the Mountain"(drummer Mickey Hart's nonsensical vocal delivery aside). Even as each successive tune and its accompanying jam elevated the intensity level, it was an almost imperceptible progression, so that the overall effect was more cerebral than visceral. The light touch demonstrated by the unison drumming of Hart and Bill Kreutzman kept the music fundamentally fluid, as did the lightning quick runs of guitarist Jimmy Herring, who feeds a seeming endless imagination with Dead material.(you would do well to search out the discs by the band Jazz Is Dead when Herring was part of that quartet.) 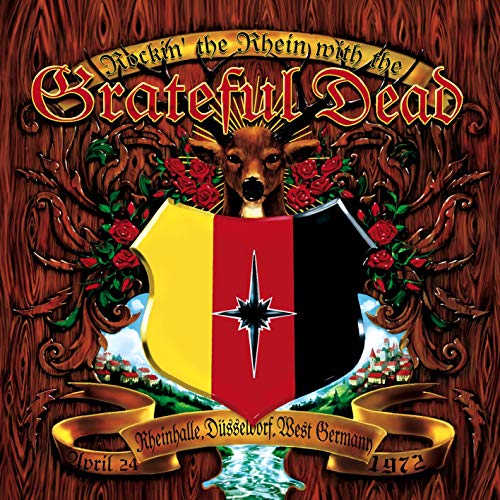 Yet the virtues of the night's two-set presentation were both large and small. Illustrating something of how he has helped rejuvenate The Allman Brothers Band over the last few years, guitarist/singer Warren Haynes supplied lead vocals as well as some harmonies that fleshed out the band's sound enormously, on the full-throated version of "The Wheel"(like "Truckin', a lyric that resonated meaningfully for both the band and the increasingly excited audience) as well as on the wordless vocalizing as a coda to "Candyman. " Haynes' detailed slide guitar supplemented the marvelous work of Herring and, especially on night two, his leadership on cover songs suggested how desperately The Dead need new material to highlight the brilliance of their old.

In fact, opening the evening of the 31st as he is most of this tour in support of his solo album Live at Bonnaroo (ATO Records), Haynes offered surprises the likes of which the band's set was sorely lacking. Significantly beginning with his eulogy to Jerry Garcia, "Patchwork Quilt," Warren's performance became more emotive, in both his singing and guitar playing, with each successive selection. Familiar tunes such as "Beautifully Broken" and "I'll Be the One" led to a stirring rendition of Van Morrison's "Ballerina" from Astral Weeks before Haynes pulled out his bottleneck to turn the Elmore James blues classic "It Hurts Me Too" almost autobiographical. And you couldn't miss the politico-social overtones of Eagles' "The Last Resort" even if Headcount's voter registration campaign wasn't taking place at the venue.

Finishing with "Soulshine" as he did the night before was the only predictable moment of Warren Haynes' set—would that you could say the same about The Dead as they followed him on stage. An early, all-too-abbreviated descent into the eeriness that is "Dark Star" gave way to blues in the form of "Little Red Rooster' and "Staggerlee," the former sung with admirable restraint by rhythm Bob Weir before he virtually took over the show with his own originals such as "Cassidy," "Looks Like Rain" and "Saint of Circumstance," none of which allowed for much ensemble interaction. There were more than a few moments, however, beginning with the molten version of The Beatles' "She Said She Said," led by Haynes, that the band seemed poised for takeoff; alas, hints at "The Other One" and other recently-unveiled covers such as The Byrds' "So You Want to be a Rock and Roll Star" never fully evolved.

The crisp rendition of "Mason's Children" followed immediately by Warren's gorgeous delivery of "Stella Blue" appeared to be laying the groundwork for some real momentum, but a second brief exploration of "Dark Star" wasn't much more galvanizing than the reprise of "Cassidy" (?!). Weir's "One More Saturday Night" was predictable and snappy, while the roaring take on Chuck Berry's "Johnny B. Goode" gave keyboardist Jeff Chimenti almost as much of a chance to shine(on authentic boogie-woogie piano) as Jimmy Herring, about whom this ode to guitarplaying could've been written ("Go Jimmy Go!"). Chimenti was impressive throughout both nights, as Dead keyboardists have usually been, but his role is not so prominent he could do much to salvage this mediocre set at this point.

In contrast, Keith Godchaux' stint with Grateful Dead in the Seventies, where he confined himself largely to acoustic piano, set up a continually delicious contrast with Garcia's economical yet free-spirited guitarwork. You might consider "Tennesee Jed" and "Sugar Magnolia" as highlights of Rockin' The Rhein largely for that reason, but there's an underlying jubilance to the whole band's playing on this evening that is something to behold; bassist Phil Lesh was a bundle of energy the first Tweeter show—maybe that's the reason The Dead excelled that night???---but it's clear listening to this thirty-three year old performance in West Germany that Lesh was as crucial a figure in the band's interplay as Jerry, if not so visible a one. Add to that Kreutzmann's significant status as sole drummer during Hart's hiatus at this time: Bill came into his own as a musician during this period, as his compact swinging style never becomes intrusive yet always makes an impression,

His dual work with Mickey as recorded on Dick's Volume 32 is one of the recurring delights of that set, to the extent the pair might listen to the comparatively succinct "Drums/Space" there to hear how such an interlude maintains pace rather than disrupting it(their second night spotlight was unintentionally comedic). The insistent means by which Brent Mydland insinuated himself into the Dead's instrumental mix is notable here too because during his tenure with the band the late keyboardist proved himself extremely versatile as a musician, singer and composer (The Dead played his "Just A Little Light" on July 30th 2004). And he wasn't reticent about taking part in the group jams either: as the Wisconsin set steams to its close, noticeably picking up speed via "Wharf Rat," his is no small role.

The Dead's peers in rock and roll improvisation, The Allman Brothers , might be rightly criticized these days for maintaining too standard a repertoire. But ABB knows quite rightly what tunes will get them where they want to go, either in soaring flight or descending to the depths of the blues. These days, The Dead might consider curtailing their free-spirited inclinations with just a touch of well-earned savvy and tailor their sets more carefully by their choice of songs: history based on the recorded documents of Rockin' the Rhein and Dick's Picks Volume 32, plus the near-schizophrenic presentation just outside of Beantown, suggests it'd make their shows much less of a gamble and tilt the odds in favor of the musical magic for which they are rightly renowned.