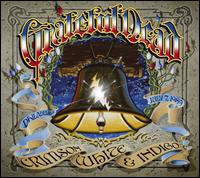 Designed as if to represent a microcosm of its unique style of improvisation, Grateful Dead's Crimson White & Indigo, July 7, 1989 is a worthy companion piece to its predecessor—Truckin' Up to Buffalo: July 4, 1989 (Monterey Video, 2005). It not only reaffirms the band was at a pinnacle of strength and versatility at this late stage of its career, but in the efficiency of its packaging of three CDs and a DVD. Philadelphia 1989 is another example of the ongoing creativity that earmarks virtually all such lavish releases from the Grateful Dead archives.

The clarity of the video is immediately striking and becomes more so as the close to three hour playing time progresses. It's all the more impressive because, like the audio discs, it is wholly without clever editing or fancy technical usage to detract from the performance: there are no bonus features whatsoever. And, while there is also no earth-shattering innovation to speak of, like the two-set concert itself, it is continuously interesting, for a variety of reasons, visual and musical. Whether in cross-stage panorama or closeups of individual members of the sextet (that invariably include another member of the group as if to suggest the integral interaction at the heart of its ensemble playing), it's as if the Grateful Dead was positioned on stage to allow the camera to capture that highlight of its chemistry.

This final show at RFK Stadium in the City of Brotherly love begins in sweltering sunshine in front of over 100,000 fans and moves into the dusk and then into darkness in a progression that mirrors the increasingly improvisational nature of the Dead's performance. The iconic San Francisco band was far removed from the free-form approach of its earliest days—and even past the orchestration of its sets designed to highlight the range of its repertoire, here including set pieces like the opening "Hell In A Bucket" as well as the more open-ended "The Other One."

Nevertheless, at each passage of jamming, beginning with the group stretching out on "Let It Grow," the band takes itself and the music a little further afield until, in a suspenseful denouement, it allows the percussion to rise from the foundation in the form of drummers Bill Kreutzmann and Mickey Hart's "Rhythm Devils" segment, while the melodic element dissipates into "Space" explored by bassist Phil Lesh, keyboardist Brent Mydland and guitarists Bob Weir and Jerry Garcia. Thankfully, no contrived visual effects appear to enhance (sic) the vivid ambiance of these two intervals, but then none is really necessary: backlighting from the theatrical spots conjure fiery outlines to Garcia and Weir in closeups, while the simple focus in and out on the drummers' kits renders an image of some otherworldly mechanism.

Grateful Dead archivist David Lemieux deserves kudos (again) for another job well done in his astute supervision of the production, while his colleague Steve Silberman, who helped oversee the box set So Many Roads (Rhino, 1999), does yeoman work too by dint of the focus he brings to his essay in the enclosed booklet. Silberman accurately places this event in Grateful Dead history without sugarcoating its significance.

The mainstream success the band were enjoying in the wake of 1987's hit "Touch of Grey" had its downside as stadium shows like this one became an albatross for the group, while the renewed vigor of Garcia following his near-fatal coma three years before was short-lived too. Meantime, the gusto brought to the group by Mydland as instrumentalist, songwriter and singer was gone a year later with his passing in tragic circumstances.

Yet Crimson White & Indigo, Philadelphia July 7, 1989 documents a rare moment in time when the evolutionary phases of a great band overlap to memorable effect. The encore of Bob Dylan's "Knocking on Heaven's Door" became an elegiac portent of things to come in the next decade of the Grateful Dead's career but here, as sung and played with utmost confidence by Garcia (who was to die himself in 1995), it sounds like nothing so much as an act of will: to seek out the best of what this remarkable group could invoke of its collective muse as the musicians joined forces in their milieu of choice, the stage.

Tracks: CD1: Hell In A Bucket; Iko Iko; Little Red Rooster; Ramble On Rose; Stuck Inside Of Mobile With The Memphis Blues Again; Loser; Let It Grow; Blow Away. CD2: Box Of Rain; Scarlet Begonias; Fire On The Mountain; Estimated Prophet; Standing On The Moon; Rhythm Devils. CD3: Space; The Other One; Wharf Rat; Turn On Your Lovelight; Knockin' On Heaven's Door. DVD: track listing as for CDs.