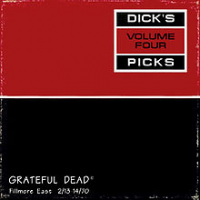 Quite apart from the the scintillating performances spread over (the first ever release of) three CD's on the Grateful Dead's Dick's Picks Volume 4, this title has all the earmarks of a classic entry into this seminal archive series. It was recorded at the fabled Fillmore East, the now defunct New York City venue operated by the late rock impresario Bill Graham and was recorded by Owsley Stanley, aka Bear, the early mentor of the band who helped usher in the era of sound systems as sophisticated as the most experimental music of the times.

Which Stanley refers to in his liner notes, somewhat long-winded by dint of his exposition on technical details which would only interest another audio engineer (or a taper, that demographic which evolve later in the Dead's career). The essay might well have simply recounted the most salient points pertinent to the recordings: development of the band's progressive musicianship, at this juncture on the eve of recording the classic Workingman's Dead (Warner Bros. 1970) now notable for the accuracy of their vocal harmonies, the connection of these recordings with a companion piece on their original label, Bear's Choice (Warner Bros, 1973)and last but not least, the co-billing of the like-minded improvisational the Allman Brothers Band at these shows (a recording of whom from this run remains in existence).

Given how astutely the tracks are sequenced here, it wouldn't be otherwise readily apparent this set doesn't comprise the complete concerts from February 13 and 14 1970, but instead derives largely from the third sets of each night. The band proceeds directly from the lighthearted "intro by Zacherle," televison and radio personality, into a high-spirited "Casey Jones." then, evincing as much economy as purpose, navigates through Martha and the Vandellas' "Dancing in the Streets," "China Cat Sunflower" and "I Know You Rider."

A pair of comparatively abbreviate culls from the aforementioned studio album, "High Time" and "Dire Wolf," leads with consummate logic into the slowly evolving "Dark Star," its tease of Simon and Garfunkel's 73rd Street Bridge Song (Feelin" Groovy)" the mobile foundation from whence the Grateful Dead initiate jams that take the multifaceted forms of the massive exploration of "(That's It For) The Other One" and an almost equally extensive (thirty-minutes plus) spotlight for vocalist/keyboardist griot Ron "Pigpen" McKernan on "Lovelight."

The latter comes as reminder this group was, at the outset of their career, as much of a dance band as purveyors of a soundtracks for experiences of higher consciousness, not to mention explorers of the roots of American folk country and blues music. The inclusion here of "Mason's Children," a rarely-performed number of the era that would not make the cut for the album out in June of this year, only further distinguishes Dick's Picks Volume Four.

Originally issued in 1996 as curated by the late Dick Latvala, its graphics generic except for the piquant shot of the Fillmore marquee on the back of the insert, this initial entry of such length now stands as the capper on this year's string of reissues by Real Gone Music that does justice, in a variety of ways, to the ongoing 2015 recognition of the fiftieth anniversary of the Grateful Dead.

CD 1: Intro By Zacherle' Casey Jones; Dancing In The Streets; China Cat Sunflower; I Know You Rider; High Time; Dire Wolf; Dark Star. CD 2: That's It For The Other One; Turn On Your Lovelight. CD 3:Alligator; Me & My Uncle; Not Fade Away; Mason's Children; Caution (Do Not Stop On Tracks); Feedback; We Bid You Goodnight.