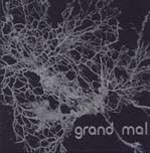 Sound shapes. The shapes that spring from the imagination. What is formless swirls and settles into shape. Or maybe it bloats into excess and then collapses in meaningless heap. The four players on this workout get their collective creativity working in tandem, coming up with some interesting twists and surprises until the final encounter.

Sound is their escape into another world. Power gets gnarled and knotted, a paean to pain or so it would seem in the gnarled knots that seep through their gray matter. Oboist Kyle Bruckmann has a penchant for breathing exercises, loosening bubbles in percolating plenitude. Karen Stackpole comes in on percussion to counterpoint the long, intense lines Bruckmann unleashes in coiled intensity on "Catatonic Posturing I." The last tune, the second Catatonic coming, however, jars because of its relentless tension, and in the context of the album the only reason for its being seems to merely indicate another adjunct. The kaleidoscope of images are wrought in agonised cries on "Shaking Palsy" (well, they don't get any prizes for the song titles) and on a quieter plane with Ernesto Diaz-Infante when they find some "Tonic Clonic." Diaz-Infante also uses the guitar as a percussive instrument adding flavour to the sounds. Overall, the images sustain listening.