By DOUG COLLETTE
April 13, 2019
Sign in to view read count
It can be brave or foolish (perhaps even a combination of both) for any artist to revisit one of their seminal works as Graham Parker has done here. But the illuminating view he's offered of this music, taken from two markedly different perspectives, reaffirms just how provocative is the material and, in turn, how inspiring it is for the musicians who play it, including the author himself. Released to complement these titles is a book of tablature (duly and extensively noted by Parker in the anniversary liners),generated by the two guitarists from GP's one-time accompanying band The Rumour (primarily Martin Belmont with aid from Brinsley Schwarz): appended with reprints of album reviews and other press of the era, the sum of this content reaffirms how worthy of re-visitation is this landmark record, in all its various forms. 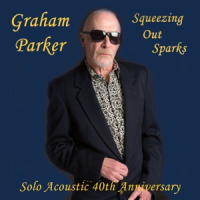 Graham Parker as often as not performs solo these days, so re-imagining this forty-year old music on his own is not that great a leap of faith. Yet his ease of delivery in this spontaneous setting uncovers the pub-rock roots of songs before the evolution of skeletal electrified arrangements. GP applies as light a touch with his hands on the fretboard as his voice at the microphone, so even the most unforgiving sentiments here ("Local Girls") carry an underlying tenderness. And perhaps because, in this bare-bones presentation, captured in just two recording sessions of unadorned realism, material such as "Protection" and "Nobody Hurts You" ignites a force almost equal in its own way to the impact of a full band. Oddly enough (or perhaps not), the only tune on which that resonance doesn't echo so deeply doesn't is "Mercury Poisoning:" Graham Parker sounds like he doesn't quite know how to approach this diatribe against his original record label, suggesting (to his great credit), he doesn't hold any grudges. 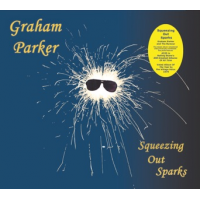 Immediately recognizable by its redesigned artwork, but released with little fanfare in 2018), this remastered edition of Graham Parker's landmark album Squeezing Out Sparks is nonetheless similar in concept to its 1996 predecessor, pairing the original studio album with live recordings. Tailored to this release is a companion collection of concert culls from a longer performance—without all ten songs from the record and sounding somewhat muffled, nevertheless highlighted by the one-two punch of the Jackson Five's "I Want You Back (Alive)" as joyous in its own way as a lethal "Mercury Poisoning." The Mark Howlett remastering of the studio content adds proportionately distinct presence, a clarity that might have been furthered if, even in abbreviated form, the frontman's own on-line account of the original recording process under the careful aegis of producer Jack Nitzsche had been reproduced on the digi-pak. Such expansion of the package could only further appreciation of these musicians' chemistry so vividly contrasted by the juxtaposition of the utter abandon they exhibit stage, in contrast to the juggernaut (sans horns of the previous two albums) freed from the confines of the studio.

Tracks: Discovering Japan; Local Girls; Nobody Hurts You; You Can't Be Too Strong; Passion Is No Ordinary Word; Saturday Nite Is Dead; Love Gets You Twisted; Protection; Waiting For The UFO's; Don't Get Excited.