By DUNCAN HEINING
July 18, 2013
Sign in to view read count
Another aspect of the problem lay in Bond's and the GBO's musical origins. All four band members—and John McLaughlin, who played in the group for some six months in 1963 prior to his being ousted by Baker in favor of Dick Heckstall-Smith—came from jazz backgrounds. As Jack Bruce pointed out in an October, 2007 interview, there might not have been an R&B scene at all, had it not been the for the jazzers.

"There was no real rhythm and blues scene. There was Alexis Korner's band and maybe a couple of other bands. It was really a very small scene and all of the people, who were playing jazz and rock & roll at that time were jazz musicians. There were a lot of jazzers who were posing as whatever to get work but at the same time very sneering about it."

This last point is one that Jon Hiseman echoed: "To me it was just the most fantastic...listen I was a Coltrane fan from '58 to '59. When I joined Graham Bond, I was sitting in the Blue Boar Café at 2 o'clock in the morning and Don Rendell and Ian Carr came in and sat down and gave me a serious talking to saying you realize you have a great future as a jazz drummer what are you playing this thing for. They were giving me a right bollocking and I didn't know what they were on about because to me it was all music."

Such "moonlighting" was clearly looked down upon by more committed jazzers. However, whilst (ex-)jazz musicians might have been crucial in building an R&B scene in Britain in the early sixties, the platform that they created was more easily exploited by The Beatles, Rolling Stones, Prett Things, Who, Small Faces and others. They were "faces," lookers with teen appeal and they made music that was more readily assimilated musically and socially. That should not take away from Bond his most singular achievement, which was a sound that in turn shaped British prog rock and jazz-rock. It also, though some may find this a stretch, had some influence upon the form jazz-rock took across the Atlantic. Though here, the means of dissemination came not from Bond directly but through the group that Ginger Baker subsequently formed with Jack Bruce and Eric Clapton.

As Jon Hiseman again pointed out, "Graham was a catalyst for a lot of other people who became much more successful and I've got to say that in a way this was Graham's demise because, while I was with him, he couldn't bear going into a club and hearing Cream being played. He couldn't bear it. And he couldn't bear their success because he couldn't understand why it wasn't happening to him but to them and his success was always just around the corner and it never came. And in the end it ate him away."

In terms of the States, Carla Bley has noted, in a May, 1977 interview, that seeing Cream in New York encouraged her in the making of her magnum opus, Escalator Over The Hill. But think also of Tony Williams' Lifetime Visions Orchestra, which of course featured ex-Bond alumni John McLaughlin and Jack Bruce, or of the important musical part played in Mahavishnu by organist Jan Hammer. In British terms, that influence is more obvious. It's certainly there in Soft Machine, Jon Hiseman's Coliseum, Matching Mole, Egg, Hatfield and the North, Caravan and any number of lesser known groups. Ironic too to consider, in light of the Blue Boar meeting described by Jon Hiseman, Ian Carr's later move into jazz- rock with Nucleus, a band where the organ of Karl Jenkins was a key ingredient.

And yet, by emphasizing Bond's switch from jazz to R&B too strongly, we lose sight of the fact that jazz remained a crucial element in the GBO's music and in Bond's later work. It was that combination of different elements—jazz, soul, r&b, rock & roll—that was unique for the time and proved the group's most lasting influence. In fact, Bond's transition from jazzer to R&B was not a swift one. It took several years.

Pianist Brian Dee remembered Graham Bond in the late fifties as a be-suited young man with a crew-cut, who looked for all the world like a white Cannonball Adderley. Describing him as being "as clean as a whistle in those days," Dee added, in a March, 2008 interview, that, "He played alto and he wasn't always on the chords as it were, so he was billed as 'The controversial alto player—Graham Bond.'" Bond played briefly in Don Rendell's Quintet Roarin' for the US Jazzland label, before leaving to join Alexis Korner's band, making it clear that his aspirations lay beyond jazz. Blues Incorporated, at the time, included Jack Bruce, Ginger Baker and Dick Heckstall-Smith. The association lasted just three months and Bond left early in 1963 taking Bruce and Baker with him. As Ginger Baker recalled in the same 2009 interview, "We [Bond and Baker] were both sort of jazz musicians and we decided, in 1962, that we were going to go commercial and the band was very popular, incredibly popular."

At first, the group functioned as a trio before John McLaughlin joined to be replaced later by Heckstall-Smith a short while later. Jack Bruce noted of The Graham Bond Trio, as it was called at the time, "Graham was only playing alto sax at that time. So, it was very much along the lines of a sort of Ornette Coleman band really in the sense it was a trio without a piano. We were all trying to find our own music as it were." This is made clear by the recording with McLaughlin from the Klooks Kleek club in 1963 that appeared on the Warner Bros Solid Bond album, issued in 1970. The music clearly owes more to jazz than to blues at this point. Jump forward to the sides with the Organization's set at the same club from 1964, I Met the Blues at Klook's Kleek, and the change is a dramatic one both in repertoire and approach, though jazz chops remained well in evidence.

It shows how Bond's career must ultimately be understood in the specific British musical context of the time. For a while, in London and elsewhere the jazz, R&B and beat scenes interconnected. With the rise of the beat groups, however, the scenes split from each other, leaving jazz very much to one side but links continued between the pop and R&B scenes, not least through shared venues and media outlets like the Melody Maker, New Musical Express and Beat Instrumental. At the time there was no "rock" scene as such, just a series of musical divisions within the wider entrainment industry. Within this, it was inevitably the more popular elements of "pop" that attracted record company and media support. Ultimately, Bond and the GBO were both of their time, in these respects, and too far ahead of it, in others.

Poet, singer and songwriter Pete Brown's sleeve notes for Wade in the Water: Classics, Origins and Oddities are thorough and thoughtful. They tell Bond's story in a way that differs from its telling here, though the analysis inevitably overlaps on some issues. The differences between these accounts is no bad thing. After all, Brown knew Bond very well—it was Bond who encouraged Brown's musical and vocal ambitions—and this lends his portrait a personal clarity and integrity. Brown makes it clear at the outset that he has no intention of repeating the more reprehensible aspects of Bond's career and life. He refers the reader simply to Shapiro's biography, which he notes "has said all that needs to be said," though he does point out the effects of Bond's heroin addiction on Bond himself and on those who knew him. 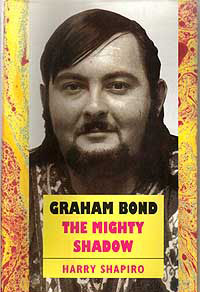 That is Brown's choice. Unfortunately, in some lights, it may be seen as the wrong one—even given the limited space available here to detail that life and career. Bond's artistic and personal "shortcomings" are, after all, closely related. Brown was certainly shocked by the revelations that emerged about Bond after his death, notably those concerning his sexual abuse of Diane Stewart's daughter. But these are not facts of a life separate to the one considered here—or in Pete Brown's sleeve notes. They are part of Bond's personality, part of his story and part of his failure.

Looking at Bond's later career, it is clear that he never again achieved the musical heights of the original GBO, despite the talents of later collaborators. Solid Bond, with Heckstall-Smith and Jon Hiseman on one set and the early Graham Bond Quartet with McLaughlin on the other, actually reached number forty in the British album charts and hints again at what might have been. The two records that followed—Love is the Law and Mighty Grahame Bond (Pulsar)—were made in America. They have their moments. Holy Magick and We Put Our Magick On You, on Vertigo, benefited from more studio time and both suggest the paradox that lay within the heart of Bond's talent. They revealed that his vision and the musical ability were intact. At their best, these post-Organization releases suggested something akin to the music that Dr John, The Night Tripper, was creating around that time. Nevertheless, overall, the material lacked consistency and coherence, lyrically and musically. By the time Pete Brown put a group together with Bond for Two Heads are Better than One, it was pretty much over for one of Britain's most mercurial jazz and rock talents.

Bond as an artist and as a flawed human being presents difficulties for critics and fans. He is not alone in that regard. Similar issues were raised in one British writer's discussion of Stan Kenton's abuse of his daughter in the context of a performance of Kenton's music at the Henry Wood Promenade concerts in 2012. Making rather specious comparisons with Richard Wagner and Leni Riefenstahl, the author of the piece seemed to suggest that consideration of the music of Wagner and the films of Riefenstahl (and Kenton's) could or must somehow be kept discrete from their lives. The comparison breaks down quickly, however. Kenton never used his music or his film appearances to advance a racist or nationalist ideology. Nor did he use either to advance the cause of incest or the abuse of minors.

With Bond, as with Kenton, the issues focus on qualitatively different moral issues. We as listeners and fans need to confront what we now know of these men and must at least hold this knowledge in the forefront of our minds when we think about them and their music. Their actions have made their lives sordid. It is our responsibility to come to our own conclusions about whether this is reflected in the art and whether those actions have tainted the art. It is the responsibility of those who write about music to deal with the whole life—not in a sensationalist or prurient way but openly and directly. Otherwise we abstract arbitrarily the individual from their life and that serves only to mythologize them.