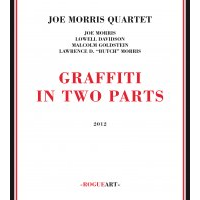 One of the main talking points regarding Graffiti In Two Parts, and perhaps the reason this session from 1985 has finally seen the light of day, must be the participation of the erstwhile pianist Lowell Davidson. After studying biochemistry at Harvard University, he moved to New York and played with Ornette Coleman who urged the ESP Disk label to record him. If the pianist is known at all, it is for the obscure but acclaimed Lowell Davidson Trio (ESP Disk, 1965) with bassist Gary Peacock and drummer Milford Graves. Davidson (who also played drums in an early lineup of The New York Art Quartet, as well as aluminum double bass, and organ), died of tuberculosis in 1990 at the age of 49. No other recordings of this mysterious figure have surfaced until now.

Guitarist Joe Morris, who befriended Davidson in Boston where the pair began working together in 1981, organized this performance, for which he also recruited violinist Malcolm Goldstein and cornetist Butch Morris. Davidson performs on drums (a loose collection of instruments rather than a conventional kit) for the first half of the concert, and on aluminum acoustic bass for the second. His approach to both is unconventional, mirrored by the other members of Morris' impromptu quartet, which delivers an American equivalent of European free improvisation, eschewing overt idiomatic references. So while Morris' styling on guitar and banjouke has its origins in West African string instrument music, the end result is very different: an asymmetric melodic percussiveness which matches Davidson's lurching knocks and rattles on drums.

Remarkable for its individuals' selflessness, the program is a low-key, undemonstrative affair. "Graffiti—Part 1" comprises a litany of indeterminate scratches, taps and clatters, moving in sudden layered bursts offering no hint of rhythm or melody. Relationships between the four remain oblique, resolutely avoiding any form of resolution. "Part 2" is more animated, with the cornetist and violinist asserting themselves through sustained brass tones and string glissandi. On bass, Davidson creates darkly bowed undercurrents, which entwine with Goldstein's abrasive violin. Passages of drifting lyrical abstraction, punctuated by off-kilter percussive noises, provide depth to proceedings, but otherwise it's an enigmatic encounter in which Davidson remains elusive.