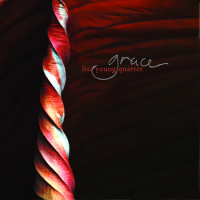 The Lisa Young Quartet released their third and fourth recordings in close proximity to one another. Of The Eternal Pulse (Self Produced, 2012), colleague Ian Patterson observes of the Melbourne-native Young's influences,

"Young—a student of south Indian music for many years—has developed a hybrid improvisational style that combines the rhythmic contours of konnakol with a keen melodic sensitivity that owes almost as much to Indian tradition as it does to jazz. ."

On Grace, Young spends no time verifying Patterson's observation. The title song is one drawn from the more percussive works of Bobby McFerrin melded with the complex south Indian rhythms mentioned above. Young's is a rhythmic palette that is broader than the standard jazz singer and she interpolates her musical will readily and completely. Sharing the same band with Pulse the two recordings work well as a diptych presentation of Young's music. Young moves seamlessly among the percussive, wordless singing and ballads. "'Cause I Weep" is breezy and ethereal while "Mani's Samba" is another wordless, percussive piece. Young is supported by a guitar trio led by Stephen Magnusson who brings considerable talent to the table, providing rich environments in which Young's vocals may properly thrive.

Grace; 'Cause I Weep; Sa Ri Ga; A Change Of Plea; Free Flow; If We Be; Drifting; Mani's Samba; The Moon Has Made Other Plans; Overflow.