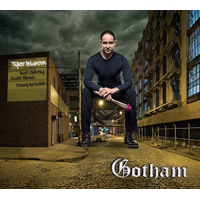 Tyler Blanton is a young vibraphonist and composer whose second album, Gotham, is nothing short of remarkable. The great playing by Blanton and his extraordinarily talented young band aside, Blanton's compositions are really what sets Gotham apart from the vast majority of new recordings by equally wonderful young jazz musicians. One can only guess that New York City made quite an impression on the young California native when he arrived in Brooklyn in 2007. This shock of the new was sufficient and prolonged enough to provide the seed material for a suite of interrelated compositions that finally appeared seven years later. Appropriately, the music on Gotham is tough, gritty and fast-paced. Gotham also has a thoughtful side. Amongst all the hustle and bustle there are strains of Bach-inspired fugues and minimalistic repeating figures redolent of the work of fellow New York resident Steve Reich. Other stylistic reference points include John Hollenbeck's Claudia Quintet and the polyrhythmic, harmonically-advanced jazz-funk sound of Steve Coleman's M-BASE.

Fortunately, Gotham is quite a bit more than a bag of influences. Blanton draws from a variety of musical sources, both jazz and non-jazz, reshaping these disparate influences into something truly distinctive. This is complicated, fast-paced multi-faceted, contemporary jazz, much like the city that inspired it.

Blanton's band is replete with young heavyweights, most of whom, like Blanton himself, are California natives. Drummer Nate Wood is best known to jazz audiences for his work in the iconoclastic electronic jazz-rock band Kneebody. Here, his virtuosic drumming consistently lights a fire under the soloists; pushing them to new heights. On the other hand, Wood's supreme command of dynamics and subtle rhythmic shifts truly bring Blanton's compositions to life. Joining Blanton in the front line is the seemingly ubiquitous and always-excellent tenor saxophonist Donny McCaslin. The lone non-Cali dude is bassist Matt Clohesy, who hails from Australia. Like the others, he's an in-demand young musician with some really impressive credits, including work with Kurt Rosenwinkel, Ingrid Jensen, Maria Schneider, and Hollenbeck. His switch-hitting abilities on electric bass guitar and string bass are central to Blanton's musical concept, as the music swings back and forth from electric to acoustic.

"Never Sleeps" is a trio piece that sets the tone for the album; just when you think it is going to slow down, it shifts into double-time. The music really takes off on the title track, where Wood's unhinged, drum'n'bass influenced playing adds considerable tension to Blanton's otherwise buttoned-down, almost classical-sounding theme. Both McCaslin and Blanton are at their most impassioned here, wringing every ounce of emotion out of the laconic theme and dark-hued changes. As one might gather from the title, "Cogs" delves into a minimalist, hypnotic bag, albeit one leavened with a dose of funk and infectious melody. Wood does some truly jaw-dropping stuff here, while Blanton generates vintage electric keyboard sounds via the MalletKat. Though Clohesy switches to the acoustic bass for the album's centerpiece, the 13-plus minute long "Tunnels," the group approach is similar; laconic cells of melody interspersed with insistently rhythmic bass riffs that also have lots of harmonic meat for Blanton and McCaslin to gnaw on. McCaslin's solo here, backed by Blanton's MalletKat, is especially delightful and leads into an excruciatingly difficult written-out melodic line; played with casual ease, of course! "Breaking Through The Clouds" closes Gotham on a gentler note, with Blanton bending some notes a la Gary Burton and McCaslin waxing rhapsodic in the upper registers of the horn.