Good Things Happen Slowly: A Life In And Out Of Jazz

By MARK CORROTO
September 13, 2017
Sign in to view read count 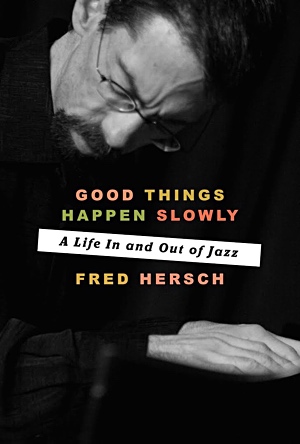 Disclaimer #1: Like the author, I harbor a blood pathogen (he HIV, me Leukemia) that is intent on killing me.

Disclaimer #2: Being of similar age, the author's discovery of jazz as an art form very much paralleled mine.

It was September 4, 2015, and I was in attendance at the annual Chicago Jazz Festival. Pianist Fred Hersch and his trio of John Herbert and Eric McPherson were performing in Millennium Park at the stunning Jay Pritzker Pavilion designed by architect Frank Gehry. The occasion was a celebration of the 25th anniversary of the Americans with Disabilities Act, a civil rights milestone that lends not only protections to those with disabilities like HIV and cancer, but shields them from discrimination. Maybe it was the night or the observance of the ADA's milestone, but, like many in the audience, Hersch's music brought tears to my eyes. Here was a trio performing at the highest level and with an energy that, to paraphrase Thelonious Monk, "lifted the bandstand."

The pianist's story is a remarkable one. Born in Cincinnati, Ohio in 1955 to a lawyer father and a Smith College graduate mother, Hersch was attracted to and encouraged to play music at a young age. While classical music was his education, he must have believed he had invented improvisation as he made a habit out of "faking" the parts he was not interested in practicing. He also was attracted to other boys, but had no information or role models at the time for guidance. He became a local celebrity at 10, winning first prize at a competition, and from there being asked to perform on television. At the time, he most definitely would not have known that Fats Waller was the host of Fats Waller's Rhythm Club, a show that was nationally broadcast from Cincinnati's WLW, from 1932-34. Certainly, the jazz germ was planted in Ohio by the local jazzmen. His classical lessons were supplemented with bits of jazz, and by his late teens, Hersch was listening to Miles Davis, Dave Brubeck, and Bill Evans. After a brief stay at Grinnell College in Iowa, a school that both Herbie Hancock and Gary Giddins attended, he returned to Cincinnati and immersed himself in the local scene.

Hersch's story of his discovery of improvisation and his sexual identity also parallels the institutionalization of jazz education, the fabrication of jazz as a post-modern marketing device, and the recognition of LGBT rights in America. His experience with the jazzmen of Cincinnati as the keepers of the flame bridged into his education at the New England Conservatory in Boston, where Jaki Byard and Gunther Schuller were creating a brand new way for the jazz performers to get "schooled." His experience straddling both institutional learning and a bandstand education gave Hersch a unique perspective on the state of jazz in the late 1970s and early '80s. Where he sought out the living jazz masters like Jimmy Rowles, Joe Henderson and Tommy Flanagan who were all but ignored by the major record labels because they were signing the "Young Lions," institutionally trained and marketing friendly attractive striplings. It's not that Wynton Marsalis and Branford Marsalis weren't talented, it's just that somehow music buyers were persuaded to believe these two brothers had originated the music they played, while masters like Sonny Rollins and Freddie Hubbard, still at the top of their game, were ignored. Hersch's apprenticeship with the masters, and his stint in formal education, gives us a historical prospective on the current state of this music. He details his persistent approach elbowing his way into the jazz scene in New York and his dogged determination to be heard, not as a Young Lion or a classicist, but as himself.

That same narrative could apply to his sexuality. Back in the day, there were no LGBT organizations in colleges, let alone high schools. The idea that a gay couple could attend the prom or be voted class president was inconceivable. Hersch had to discover his sexuality in a time that, unfortunately gave rise to the AIDS crisis and the fear of discrimination. Of course, he kept his sexuality hidden for most of his early career because it may not have been true at educational institutions, but bandstand apprenticeships were not welcoming to a gay musician. Sure, fellow Ohioan, Dayton-born Billy Strayhorn (1915-1967) was as open as a gay man could be in the 1940s, '50s, and '60s, but he was seemingly under the protectorship of Duke Ellington and rarely felt the spotlight his excellent musicianship merited. Hersch reveals in the book how he came out, why he came out, and how he did so on his own terms.

In between his rise in the music world that has included ten grammy nominations, a Guggenheim, twice being named Pianist of the Year by the Jazz Journalist Association, he details his music projects, including his musical tribute to Walt Whitman's Leaves Of Grass and the story of his two month coma, which came on from the complications of HIV. His telling of the ordeal and its complications are gut wrenching. It could only be through the love of his partner Scott Morgan and his will that he survived. As he explained about his brush (let's say brushes) with death, "a confrontation with death brings home the preciousness of life... It was the newest, brightest, shining, most surprising, most uplifting feeling I had ever had."

Maybe that was the feeling that informs the music he is currently making. The crowd most likely absorbed those vibrations that evening at the 2015 Chicago Jazz festival.