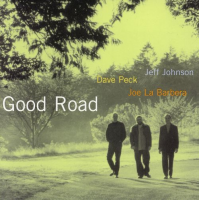 Especially for Musicians would be a great subtitle for this recording. It's easy to imagine a queue of saxophonists and other hornmen outside the Peck ranch demanding to play with him. On most tracks the guy's harmonic command and invention send him teetering on the edge of a completely new composition. The one tune of his own is of course an exception. His sometime partner Bud Shank elsewhere recorded a set of Peck originals.

Possibly the least consistent track is the opener. Peck goes so far from Jerome Kern's original as to have created a slight clash of character between the invention and the original on this long track. He likes to begin with fragmentation and reharmonisation of a theme before going into enough original detail to make it easily recognisable. This is definitely not a yet again set of standards. He does too much with them for that. The improvisation on Ellington's "Low Key Lightly" may of course stay close to the original. This slow theme is not one I (or probably many people) know well. Peck does key lightly and the volume level is low, as if he were playing for people close to the piano. Turn the volume up.

He also says in the notes to this set that he thinks he was maybe too meditative. No. Guys who navel-gaze at the keyboard don't know enough to worry about what they might not be doing. The amazing low, slow intro to "Green Dolphin Street" might suggest engrossment, but as he fills in details and renders the tune easily identifiable, the filling out of the music intensifies a sense of pace. Like Monk, he values economy, pays scant heed to bar lines, and does amazing things harmonically. Unlike Monk, he sounds closer to Bill Evans.

As an accompanist he's also everything claimed for him above. Jeff Johnson is an impressive soloist on bass, very much on the closer "She Was Too Good to Me," and also on "Just in Time." That latter tune is played so perkily that there's no need to guess what tune the opening piano fragments come from. The piano accompaniment is creative, and when it comes to trading fours with Joe La Barbera's drums, Dave Peck generates even more new material. It's the circle of the complete ensemble pianist, accompaniment, and new composition very close to each other.

On "What is this Thing Called Love," the tune is wise enough to keep out of the way; there's some tour-de-force of drumming and some very powerful solo bass playing. Good selection of sidemen, as of notes.

Yesterdays; Low Key Lightly; Green Dolphin Street; The First Song of Spring; Just in Time; The Star Crossed Lovers; What Is This Thing Called Love; She Was Too Good to Me.