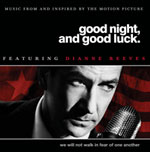 Dianne Reeves performs on screen in the film Good Night, and Good Luck, which stars David Straithairn as legendary journalist Edward R. Murrow. Shot in black and white, the film contains numerous scenes in which the singer and her quartet deliver the jazz slowly and deliberately.

Reeves, one of the world's premier jazz singers, blends tradition with a contemporary design. She bends each of these favorite songs to give them a unique appearance. Intimate in her presentation, she projects with strong emotion while squeezing every ounce of passion from her songs.

Slow and graceful songs such as "How High the Moon" and "Straighten Up and Fly Right" are reshaped to fit both the film and Reeves' special caress. Recall that both of these tunes have a history of stepping up the pace and flying high with speedy feet. Reeves draws out a melody and transforms the scene into a moody affair that warms the heart. It's what she does, and nobody does it better.

Matt Catingub departs from his usual upbeat alto saxophone gaiety and works each song alongside Reeves on tenor, oozing passionately with breathless refrains. Together with piano, bass and drums, the two artists caress each song comfortably, giving the soundtrack a moody texture.

There are up-tempo numbers, too. Catingub plays alto on an upbeat "You're Driving Me Crazy" and blues tenor on "TV is the Thing This Year," which both swing with a light spirit. "Pick Yourself Up," a song that could find itself integral to just about any film's plot, comes with a built-in Latin jazz arrangement.

For the most part, however, singer and tenor saxophone combine with piano trio to place the viewer in a nightclub setting where smoke fills the room and everyone knows how to relax. It's what we all need after a hard day at the office, or after a long day of confrontation with Senator Joseph McCarthy and his House Un-American Activities Committee anti-Communist hearings.

Straighten Up and Fly Right; I've Got My Eyes on You; Gotta Be This or That; Too Close for Comfort; How High the Moon; Who's Minding the Store?; You're Driving Me Crazy; Pretend; Solitude; TV is the Thing This Year; Pick Yourself Up; When I Fall in Love; Into Each Life Some Rain Must Fall; There'll Be Another Spring; One for My Baby.