By MIKE PERCIACCANTE
July 19, 2014
Sign in to view read count 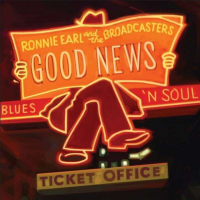 Ronnie Earl first gained national attention in 1979 when he replaced Duke Robillard as the lead guitarist for Roomful of Blues. After spending eight years as the main axeman in that group, Earl decided it was finally time to completely branch out on his own. Though Earl had released his first solo disc, Smokin', in 1983 and followed it with They Call Me Mr. Earl in 1984 (both on Black Top Records), it wasn't until 1987 that he decided to leave the band and his sideline job became his main gig as solo artist and bandleader in his own rite. In the ensuing years, Earl has released critically acclaimed albums for a number of labels: Verve/Polygram, Antoine's Records, Telarc Blues, Bullseye Blues, Audioquest Records, CCR Records, Hepcat and Shout! Factory. During that time, in addition to recording and touring, Earl has won multiple Blues Music Awards and Independent Music Awards, served as Associate Professor of Guitar at Berklee College of Music, released an instructional video (later released on DVD) and has worked as an the blues instructor at the National Guitar Summer Workshop.

Good News (2014) is Earl's eighth CD released by Stony Plain Records. On the album he is again joined by his backing band of the past 25 years, the Broadcasters (Jim Mouradian on bass, drummer Lorne Entress and Dave Limina on keyboards) as well as special guests—vocalist Diane Blue and guitarists Nicholas Tabarias and Zach Zunis. The disc features a number of electrifying blues instrumentals and a few songs on which Blue handles the vocals. The album's lynchpin track (without a doubt) is the amazing interpretation of Sam Cooke's civil rights anthem "Change Is Gonna Come" with a spine tingling vocal turn by Blue. Blue's vocals are also vital to the Boston Marathon memorial track and album closer "Runnin' In Peace." Other highlights include the gospel-influenced title track, "Good News," the eleven minute version of Buddy Guy's "In the Wee Hours," "Time To Remember," "Six String Blessing" and "Blues For Henry" (written with the late Hubert Sumlin) and the rockabilly infected "I Met Her On A Train."

Earl plays with fire reaching deep into his being to coax the joyous abut sometimes world-weary emotions that can only be conveyed through blues and soul music. The interplay between his guitar and his bandmates is a thing of beauty. The chemistry seen here is a remarkable thing to behold. It sounds completely organic. This is a musical state and mixture, a gumbo if you will, that can only be achieved when a band is so in tuned with each other that the back-and-forth, interaction and instrumentation becomes more of a dialogue, a musical conversation with the occasional accent. Good News is a solid addition to Earl's canon.

I Met Her On That Train; Change Is Gonna Come; Time To Remember; In The Wee Hours; Good News; Six String Blessing; Marje's Melody; Blues For Henry; Puddin' Pie; Runnin' In Peace.