By WILLIAM GRIM
February 18, 2005
Sign in to view read count 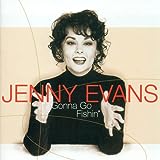 Long a fixture on the Munich jazz scene, British-born singer Jenny Evans is a skillful performer and engaging lyricist. This album was recorded live at the Jazzclub Unterfahrt and shows the singer at the peak of her skills.

The title track is a too little-performed song that Duke Ellington wrote for his score to the Otto Preminger movie "Anatomy of a Murder."? Evans hits her stride with two pieces she co-wrote with Munich-based trumpeter Dusko Goykovich, "Hope"? and "Love Is the Answer."? Readers may remember that the Yugoslavian Goykovich was a member of the Woody Herman Band of the 1960s in the trumpet section that featured Bill Chase and Don Rader, among others. The haunting melody of "Hope"? allows Evans to show off her husky alto to great effect, while "Love Is the Answer"? is a first-rate Latin swinger. A nice Latin feel also pervades "In a Natural Way."?

Evans shows that she has assimilated the style of June Christy in her rendition of Gershwin's "The Man I Love."? Pianist Walter Lang gets a chance to stretch out on this song with a finely crafted and elegant solo. The best performance on the album is Evans' interpretation of Oliver Nelson's "Stolen Moments,"? which deserves to be ranked alongside the better known versions by Mark Murphy and Kurt Elling. Her intonation and scatting are superb on this tricky song that features complex harmonies and a fairly disjunct melody.

I had never heard of Peter Kreuder's "Fuer Eine Nacht Voeller Seligkeit"? ("For One Night of Bliss"?) before, which appears to have begun life as an up-tempo show tune, but Evans wisely slows down the tune so that it becomes a melancholy German Torchlied. Less successful is "Still She Dances,"? another in a long line of failed attempts to bring about a shotgun marriage of jazz and Arabic music.

Although Evans performs up-tempo tunes with aplomb, her handling of ballads and slow tunes is tremendous. Not many singers would have the confidence to end an album with the lugubrious "Angel Eyes,"? but in her able hands the audience is left wanting more when she reaches the final line, "'Scuse me while I disappear."?

All in all, this is a remarkably well-performed album that is diverse in content and also thought-provoking. Ballads, up-tempo tunes, standards and newly-composed songs—there's something for everyone here.