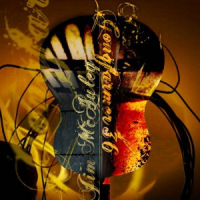 As its title suggests, Gongfarmer 36 is the belated follow-up to guitarist Jim McAuley's Gongfarmer 18 (Nine Winds Records, 2005). But the seven-year delay is not surprising, as additions to McAuley's discography tend to arrive sporadically—the last being Vignes (Long Song, 2009), with the wonderful Acoustic Guitar Trio which brought him together with Nels Cline and the late Rod Poole. As well as two solo and two trio albums, The Ultimate Frog (Drip Audio, 2008) features a quintet worthy of note.

Gongfarmer 36 contains ten relatively short tracks, ranging in length from just over two minutes to just over eleven. They come from a variety of sources—live performances, studio recordings, including alternate takes from that first solo album, and a home practice DAT—making this a fine showcase of McAuley's solo work. The music is just as varied as its sources; as on Gongfarmer 18, McAuley employs a range of guitars and implements to give a master class in improvised acoustic guitar music.

The only composition is Vincenzo Galilei's beguiling Renaissance dance tune "Salterro," which highlights the guitarist's exquisite technique; at times it is possible to believe it is a duo but, in his sleeve note, McAuley points out that no editing, overdubs or electronic enhancements were employed. On the other improvised tracks, it is not always immediately obvious that McAuley is improvising; many passages flow so freely, and with such impeccable logic, that they could easily be composed.

Being entirely acoustic, McAuley's playing owes as much to folk music and the blues as to jazz and improv; fleetingly, he is just as often reminiscent of John Fahey or Davy Graham as he is Derek Bailey. But, while an occasional phrase may hint at such roots, overall his music is a rich tapestry in which the different strands become interwoven and indistinguishable. So, "Blues for John Carter" (titled for the great composer and clarinetist, with whom McAuley had lessons) belies its title by flirting with a blues scale before becoming a wide-ranging improvisation which only includes the occasional hint of a blues phrase.

"Another November Night" features twelve-string and tuning fork, imaginatively combined to create an appealing metallic timbre that is used in noise passages which diverge from the strict tempo playing that typifies the rest of the album. Four tracks feature nylon-strung classical guitar, the most notable being the eight-minute home practice recording "Una Lunga Canzone," which gives an intimate and siply gorgeous glimpse of McAuley at home, playing spontaneously for himself.

Incidentally, a gong farmer's job in Tudor England was to collect human excrement from places like cess pits and castle moats at night, and transport it away from human habitation. All of which makes McAuley's choice of titles for his solo releases seem even more bizarre; there are definitely plenty of jewels here—but no excreta. This is a consistently beautiful album without an average or weak track. Roll on Gongfarmer 54!