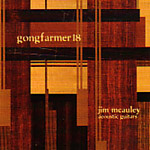 For a musician whose formidable technique and imagination require denials of overdubbing, guitarist Jim McAuley has long maintained a low profile. Thanks to Vinny Golia, that's about to change with Nine Winds' release of Gongfarmer 18, an explosive calling card that vaporizes notions of what an acoustic guitar can do beautifully. McAuley accomplishes his transformations via unique tunings, blazing harmonic insight, and the internal compass of a veteran sailor. Smear fast-fretted blurs into the tapestry envisioned by Kio Griffith's rich cover graphic. When his blues roots surface, McAuley suggests John Fahey in a Tim Burton movie.

Yet, for all the innovation and surprise, the collection often succeeds the most during interludes of resonant reveries that seductively draw the listener in. Serenity tempers the segments of intense virtuosity.

McAuley's detuning during Dark Blooming gives his classical guitar the sound of a sarod. Briskly blunted strings sing percussive bumps under his steady paddle-wheel picking. The brief "Stately Chords lovingly introduces the twelve-string in a musing miniature. The first of two pieces dedicated to John Carter, "Blues for Wally Blanchette (1), takes blues contrivances and curls them into new shapes. "Eyelids of the Buddha stages a dazzling trip, McAuley blistering the twelve-string, only to sink into a melting coda. He gives himself a strenuous workout on "1+2, then follows up with the gently exquisite "Nika's Waltz, an anniversary piece for his wife.

On "Kneebounce, McAuley's Marquette prepared parlor guitar becomes a busy sound catalogue with ample illustrations. Creating harpish tones for "Sulustar Sipsihiilere (Whisper of Stars), he picks a shimmery soundtrack for ice crystals, while "Before Thought offers agile precognitive runs. "Blues for Wally Blanchette (2) continues his fruitful expansions on the blues form, wringing the new from the familiar. Ending with the enigmatic "Stone Cone, McAuley weaves a song that seems to unravel as it's being formed.

Ringingly recorded by Scott Fraser to catch the full spectrum of McAuley's sonic pallette, Gongfarmer 18 indelibly marks the versatile guitarist as a musician with few peers and innumerable ideas.