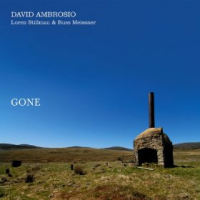 In many ways, bassist David Ambrosio can track his adult life and his musical relationships by his back-and-forth moves between Manhattan and Brooklyn. Ambrosio has called each borough home on more than one occasion over the past few decades, observing the key differences between each scene from the inside. He doesn't discriminate when it comes to choosing a New York City spot to put his bass down and play, and he happily shares his talent(s) wherever he can, but it's become increasingly clear that he prefers the ever-evolving and growing jazz community in Brooklyn to the more established, steady-as-it-goes atmosphere that Manhattan offers.

When Ambrosio left Manhattan and returned to Brooklyn in 2011, he solidified musical relationships with two musicians that he met in the mid '90—saxophonist Loren Stillman and drummer Russ Meissner. Regular get-togethers became the norm, giving these three an opportunity to further their friendship and create in a relaxed, laid back manner. The music that this trio makes has no hidden agendas, it's not heady or heavy, it's not built around any über-intellectual concept, and it's not meant to evoke any specific feeling. It's trio music that's casually conversant, possessing an equable temperament and (often) moving with a fairly steady gait; the session that birthed Gone is simply a reflection of all of that.

On a December day in 2012, these three men casually made their way to the studio, set themselves up in a circle, played some original music, took a few breaks along the way, and finally called it a day. Of course, these three men are gifted improvisers with big ears, so the resultant music isn't bland throw-away stuff. Ambrosio's bass soloing alone makes the album-opening "The Proof Is In The Pudding" worth hearing; the skittery, rhythmically vague "Verse" continually surprises; "Matters Of Fact" carries a sense of suspense and mystery; and the title track is a bit more chipper than the rest, showing some spring in its step.

The lets-just-play aesthetic that surrounds this trio is a refreshing alternative to the hyper-particular constructive ideals that are pervasive in jazz today. That relaxed vibe is the glue that binds all of the music on Gone.

The Proof Is In The Pudding; Verse; Let It Go; Matters Of Fact; Gone; Brahmin; Her Love Was Like Kryptonite.