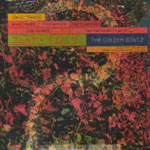 Golden Boat 2, which was inspired by the life and poetry of Srecko Kosovel and is dedicated to the memory of Steve Lacy, is an ambitious work—a total of seventeen mostly short sections covering two CDs and totalling 97 minutes. The pieces use a mix of easily recognizable classical writing for a nine-member string orchestra, sometimes alone and other times with various members of the main quintet chiming in. The strings feel like a glue that help tie the sections together.

Kosovel lived but 22 years (1904-26), growing up during World War I and seeing the rise of Communism. He is revered in Slovenian poetry circles for his intensity, vision, experimentalism and fullness of expression, despite his youth. The titles and music of the individual sections echo the mixture of the ecstatic and the morbid that can be seen in Kosovel's poetry. Steve Lacy has inspired many musicians (see Andrea Centazzo's feelings about him here). His presence also had features of the ecstatic, so he pairs quite nicely with Kosovel.

The recording documents a live performance led by drummer Zlatko Kaucic during the Lent Festival on July 4, 2004 in Maribor, Slovenia. It brings many styles together, including ballads, folk songs and dances, and pure blowing. It communicates a strong feeling of Eastern Europe—including the people and culture of Slovenia—mixed with American jazz, and the result is accessible but sometimes challenging.

Paul McCandless (oboe, English horn, bass clarinet, flute) and Emanuele Cisi (tenor and soprano saxophones) play beautifully off of each other. At times soft and sweet, but quickly shifting to freer sounds, they carry most of the soloing. Kaucic's drumming is always interesting, since he provides a pulse when it is needed, but with many embellishments.

The sections, which generally flow into one another, are not held together by anything as overt as common or repeating themes, but more by shifts of emotions. However, there is something subtle that holds the whole work together. Much of the music has a pastoral calmness about it, and many of the themes are quite beautiful. It is very easy to close your eyes and imagine being outside in the sun and fresh air, forgetting all of your daily stresses for an hour and a half and enjoying the soothing feeling of this music—as well as the surprises that pop out here and there.