By JAKOB BAEKGAARD
February 18, 2015
Sign in to view read count 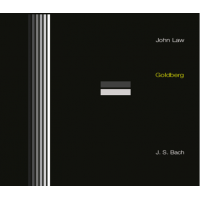 J.S. Bach's The Goldberg Variations is one of the most famous works in the literature of the piano and an endless source of inspiration for pianist around the world -and not only classical pianists. Bach's music simply transcends genres and his ability to develop and sculpt variations on a theme remain unsurpassed. It is no coincidence that the legendary saxophonist Coleman Hawkins, himself a master in the art of thematic variation, deeply admired Bach.

In the informative notes for his interpretation of Goldberg, British pianist John Law explains the structure of the work and sees a resemblance to jazz: "The Goldberg variations fall somewhat between a chaconne (variations on a repeating chord sequence -rather like we do in jazz!) and a passacaglia (different harmonisations over a continuously repeating ground bass)."

In his own interpretation of the work, Law has made a bold move. He has bookended a traditional reading of The Goldberg Variations with two of his own electronic, ambient compositions based on the harmony and bass line used in Bach's work. The result is a fascinating portal into Bach's music that sets the mood for a total experience of the work.

The Goldberg Variations is indeed a complex work and it has been revisited by piano masters like Glenn Gould and Andras Schiff. Recently, Danish pianist Carsten Dahl has made a version for prepared piano that radically transforms the sound of the music. What Law does is primarily that he changes the context of the way the work is experienced, but this is also crucial. Most artists know how important the frame is for the experience of the painting and Law has respectfully changed the frame and removed the dust so the grandeur of Bach's work can be heard clearly.

However, with the original pieces being so successful, one can't help but wonder how a complete electronic, ambient interpretation of Bach's work would sound like. That is a question for the imagination or, perhaps, the next step in yet another interpretation of this endlessly fascinating work.