Schlippenbach Trio: Gold Is Where You Find It 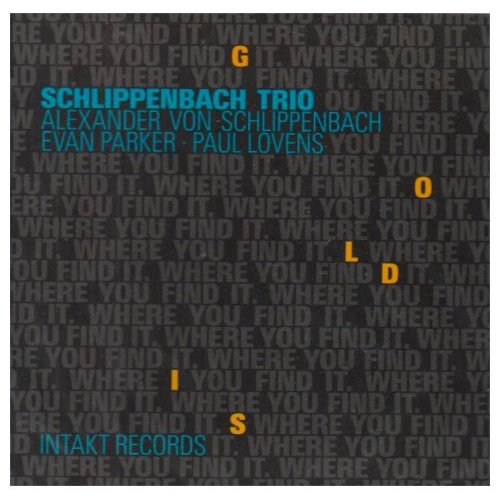 As this trio is decades into its existence, readers and potential listeners might be forgiven for thinking that the trio's collective music is losing some of its power. This, however, is far from the case. There's kinetic energy about some of the performances here but that sense is tempered by the group's distinctly non-formulaic understanding of each other as musicians. The resulting mutual understanding amounts to something far in excess of the number of participants in terms of profundity.

It's interesting to note that Evan Parker brings only his tenor sax to these proceedings. So great is his individuality on the bigger of his horns that it seems like he's developed two entirely separate vocabularies. This is no trivial feat when so many people seem to have difficulty in mastering one, and here it manifests itself most overtly in agitated lines, as on the opening in "Z.D.W.A," where the group energy is subjected to the most rigorous scrutiny and the music comes in fits and starts all of which avoid anything disjointedly episodic.

"Amorpha" is something else again. Here the music moves by stealth and the essential paradox is that in less than four minutes the trio manages to cover so much ground. Von Schlippenbach comes into his own here, though of course not in the sense of being in any way removed from his compadres. As elsewhere the sense is of profoundly collective music.

In defiance of any animal aggression suggested in a title like "Monkey's Fist" the music again has about it a reflective air, albeit one refracted through some rarefied prisms. Whilst Parker does nothing as impertinent as leading the ear is drawn repeatedly to his lines, so much so in fact that it takes a while for the subtleties of Lovens's contribution to come through. When they do it's a pertinent reminder of this music's power to move.

The same considerations come to light on "The Bells Of St. K," where Parker gives the music its initial shape only for Von Schlippenbach and Lovens to test the malleability of the form he's essentially created. When the music comes home listeners might not be able to avoid the impression of work in perpetual progress.

Z.D.W.A.; Slightly Flapping; Amorpha; Gold IS Where You Find It; K. SP; Monkey's Fist; Lekko; Cloudburst; Three In One; The Bells Of St. K.

Title: Gold Is Where You Find It | Year Released: 2008 | Record Label: Intakt Records