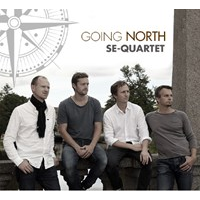 This album is dedicated to the refugees who have arrived in Scandinavia in recent years. On the day it was released, April 7 2017, one of those refugees, Rakhmat Akilov, aged 39, drove a hijacked truck into the entrance of the Åhlens department store in the centre of Stockholm, the Swedish capital, killing four people.

Akilov, an unstable character with Islamic State sympathies, was upset because his application for a residence permit had been refused and he was due to be deported to his native Uzbekistan.

Scandinavians traditionally deal with such incidents calmly. Rasmus H. Thomsen, pianist/leader of the Swedish SE-Quartet, a committed Christian, goes so far as to turn the other cheek. His songs on this album include "The Power Of Forgiveness" and "Even Death Will Die."

He also wrote "Song For Paris," as "a gift" to the French capital following the Islamic terrorist attack there on the satirical magazine Charlie Hebdo in January 2015, in which 12 people died.

One way or another, this is a deeply felt album, the quartet's third release in five years. It is influenced by popular and classical music, avant-garde jazz, gospel and soul and introduces a new instrument to jazz—the didgeridoo. And on "Even Death Will Die" it features—very successfully—the Stella Chamber Choir.

This last number was inspired by "Some Die Young," a song by the Swedish singer Laleh, which has been adopted as an unofficial anthem by those who lost loved ones in attacks in Norway in 2011 by the far-right terrorist Anders Behring Breivik that claimed 77 lives.

It's one of the stand-out tracks, a haunting melancholic dirge, featuring the aforesaid didgeridoo, Thomsen's minimalist piano and some ethereal soprano by David Ehrlin.

Not all the songs have a refugee or terrorist theme. Drummer Antti Ojala's "Autumn Mist," evokes a fall morning in Sweden and features Ehrlin on bass clarinet. Ojala describes its inspiration: "The fog lay over the landscape and the sun's rays were trying to break through to strengthen the autumn colours. It was breathtaking."

Ehrlin's "The Bird's Return" has nothing to do with Charlie Parker. The bird in question is the dove released from the Ark by Noah which returns with a leaf, indicating that land is near.

And Thomsen's "The Happy End" is just that; a jazzy romp, providing a welcome escape from troubles currently plaguing an otherwise peaceful part of the world.