Godfather of the Music Business: Morris Levy by Richard Carlin 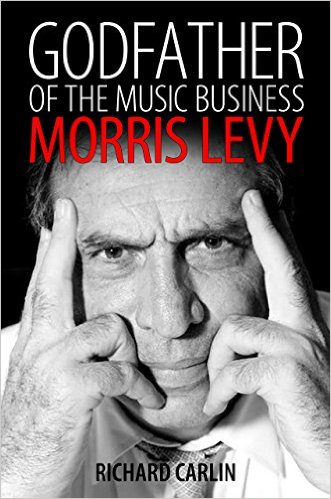 Well, I don't suppose it is an understatement to say that club owner and mid-20th Century music entrepreneur Morris Levi was a Son-of-a-bitch. That has been very well documented before Richard Carlin's in depth and informative biography, Godfather of the Music Business: Morris Levy. What Carlin has done is bring together through extensive interviews and print research, most of the known anecdotes and disparate ephemera about Levy, presenting a picture of exactly what we have all known, Levy was a common and uneducated thug, the music cog in the wheel of organized crime over the middle 40 years of the last century.

Through 304 pages of dense and thoroughly researched material, Carlin reveals Levy as a young and ambitious street tough in the middle-1940s, who at the age of 22 after having worked at the Royal Roost, founded arguably the most famous New York jazz club, Birdland. Carlin give a fresh description of Charlie Parker's last appearance at the club on Saturday, March 5, 1955, a week before the saxophonist's death. Carlin is also the one of the first to suggest that Birdland was more than likely not named for Charlie "Yardbird" Parker, rather was keeping with the naming convention of the current culinary crazy of chicken-related establishments, including the Royal Chicken Roost and Topsy's Chicken Shack. But it was easy enough for the entrepreneurial Levy to sublet that thread into honoring Parker.

From this auspicious beginning, Levy learned to establish publishing rights for the music played in the club, eventually parlaying that into the recording industry with labels like Birdland, Gee, and, ultimately Roulette on which he would release the classic Atomic Basie (1957). This, of course, was just the beginning. Levy's reach was great and long, until his time ran out. Graphically detailed was Levy's relationship with the tragic Frankie Lymon, who populated Gee records with both releases from his group, The Teenagers, and, finally, his solo recordings that included the successful "Why Do Fools Fallin Love.' Lymon was to perish by Morpheus in 1968.

Known for strong-arming his artist, Tommy James of Tommy James of the Shondells, held off publishing his autobiography, Me, the Mob, and the Music: One Helluva Ride with Tommy James & The Shondells (Scribner, 2010) until well after the deaths of all of the principle mod-connected recording personalities, including, and most especially, Levy who died of metastatic colon cancer in 1990, during a 90-day stay from having to enter prison on a charge of conspiring to extort.

It is so easy to reduce Morris Levy to the level of a common thug, but there was absolutely nothing unique in how he behaved regarding the music industry. He just gained notoriety for his part. Was he a lovable rogue? I am not so sure. Was he a mirror to white America during that golden age of music making and recording between 1950 and 1980...absolutely. He is a part of our history and a part of all of us and we must claim him. And in doing so, we must atone, Yom Kippur from his Sephardic Jewish background. For his art was one of exploitation that, as exploitation always has, generated great, great music. Carlin's carefully researched and presented portrait of Levy bears this out, with an even temperament and the keen eye of an historian.