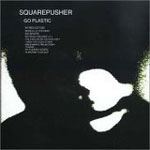 Squarepusher's musical territory has certainly had its hills and valleys. With his first full-length record, Feed Me Weird Things, Squarepusher (aka Tom Jenkinson) launched a series of fine drill-and-bass masterworks on the Warp label. Up until 1998's Music Is Rotted One Note, every single Squarepusher record was a keeper. But at that point, he dumped the sequencer and switched over to a more spacey, acoustic approach involving lots of real instruments. It was a disastrous turn for the worse.

Fortunately he seems to have grown tired of this dull morass of navel-gazing... and with Go Plastic Squarepusher proves he never really lost the magic. (Musta just been keeping it in his back pocket for a while.) Go Plastic takes the advanced rhythmic ideas of the old school drill-and-bass and applies them within a richer sonic palette. Instead of plain vanilla bass and snare hits, we now have whistles, crashes, vocal fragments, synth noises, and any toys Jenkinson could coax sounds from in his studio. The music as a consequence becomes more multi-dimensional and energizing. You won't find any four-to-the-floor beats on this one. Instead, the rhythms sputter and splatter their way along at an often blistering pace, always changing: doubling, or swinging, or digging deep into the Latin groove. Quiet moments (which are not common on Go Plastic) only serve to emphasize the contrast between silence and Jenkinson's dynamic-sculptural process of sound accretion.

Go Plastic is not a noisy record in the slightest, even though Squarepusher shoves in a more than a few square waves here and there. Every note, every component of this soundscape, serves a purpose. It's leading, it's following, or it's trying to relate. Amazingly enough, most of these tracks have occasional passages where one might get up and briefly shake one's booty—before sitting back down and trying to figure out what just happened to the corporeal groove. For an adventurous fan of electronic music, Go Plastic will throw the doors wide open. And if you need a break from the Britney Spears dance grooves, check out what Squarepusher has to say. Hard to deny the timeless masterpiece here.