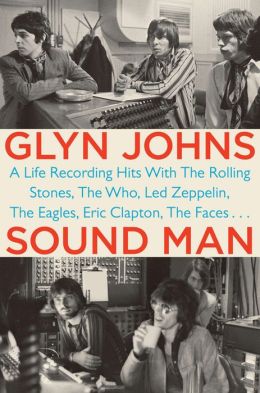 The only thing wrong with famed producer/engineer Glyn Johns' Sound Man is that there's not enough of it. The famed producer/engineer maintains such a breezy tone throughout his memoirs (perhaps as overcompensation for a very dogmatic reputation), so the fifty year span he covers seems like but a fortnight and it almost reads like he's just scratching the surface.

Upon reflection based, in part on scanning the chronological appendix of his work, though, and to his credit, Johns is nevertheless to his great credit able to reaffirm his love of music and the recording process by which he's able to collaborate with the artists, to create recordings that accurately represent their music. In his mind, whether its icons such as the Beatles, the Who or the Rolling stones or niche artists like Joan Armatradng and Ryan Adams, the personalities involved are less important than the work. Still, for Johns to share just a bit more of the studio dynamic in some of the high profiles sessions, rather than just an occasional flash of insight—such as his last work with the late John Lennon—would not only elevate his own profile (as if that was really necessary), but supply information and understanding about some of the most well known musicians of our time and the work they created.

For instance, his work with the Eagles early in their career is fairly well known to have become more than a little tumultuous, at least by the time it ended during sessions for On the Border (Asylum, 1974). So, to know more fully his own perceptions on the band and how they guided his work with them, would be less gossipy than instructive in revealing how that band worked, especially as they will admit, nay almost boast, of the often stormy process by which they recorded some of their most famous albums.

Then again, what may determine the extent to which Glyn Johns goes more or less in depth is the extent of his relationship with the artist. On again off again as it is, his bond with the Rolling Stones spans decades, so no doubt he's comfortable describing interminable waits in the studio for Keith Richards as well as the laughable incident where the guitarist, late for a gig, leaves his auto running outside the venue. In contrast, while some description of the working atmosphere in a studio with the volatile likes of the Who would be fascinating, Johns and the band did skip years between collaborations which probably doesn't allow the intimacy of the connection past the professional stage. Likewise, given Eric Clapton's self-avowed struggles in the Seventies and beyond, discretion is the better part of valor on the part of this famous engineer and producer.

In his increasingly recurrent observations on the changes in the music business and how it affects the creative process, Glyn Johns is a little more frank in his assessment, but he never sounds so bitter or curmudgeonly that his comments undermine the relish he obviously displays for his work and the people with whom he combines forces. And that includes businessmen the likes of Jerry Moss, with Herb Alpert, the head of A&M Records and famous impresario Bill Graham. Headstrong and opinionated as the author is known to be, his writing portrays him as a man as cognizant of his weaknesses as he is proud of his strengths.

Without sounding self-serving, he's also able to describe the pragmatism that allows him to exit a studio building project when it devolves into a dead end, but on a more positive and humble note, to carry a project like the ARMS benefit for Faces' Ronnie Lane not just to its logical conclusion (the initial rehearsals concert and the tour) but beyond to the establishment of a charitable foundation.

Ultimately what most impresses about Glyn Johns in this book is the world view he depicts that, firmly established and continuously grounded in that greatest of all the arts, music, nevertheless offers a broad enough perspective to give the title Sound Man multiple and positive meanings.