By JAKOB BAEKGAARD
December 12, 2017
Sign in to view read count 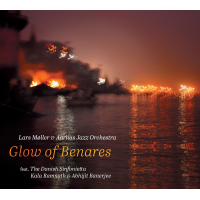 The Danish saxophonist, composer and bandleader, Lars Møller, has always been curious about the different languages of music and this curiosity has also followed him in his work as a conductor of Aarhus Jazz Orchestra. He has taken the reputable orchestra to new artistic heights with ReWrite of Spring, his bold homage to Igor Stravinskijs Sacre du Printemps, and with Glow of Benares he takes yet another musical leap, adding the Danish Sinfonietta to the line-up.

The album builds on Møller's early fascination with Indian music, which he has studied intensely and documented on an album such as Centrifugal (Stunt, 2001) that included the tabla playing of Ole Theil. Glow of Benares also includes a tabla player, but this time Møller has enlisted the Indian virtuoso, Abhijit Banerjee, and another Indian star, violin player Kala Ramnath.

The use of guest stars in a big-band setup is nothing new. In fact, it is rather the norm these days where something has to sell the music. However, the inclusion of Banerjee and Ramnath isn't about flashy solos, but the way that they help to shape a music that is truly a fusion of contemporary big band music and Indian music. The soaring violin of Kala Ramnath gets into a dialog with the orchestra as the musical voices swirl around in an intense raga on the title track. Ramnath's voice reaches the sky as Banerjee builds a polyrhythmic groove and later the full vocabulary of the big band is used to paint on a wider canvas.

Indeed, this is a music of many songs. It is vibrant and sorrowful while tactile in its attention to detail, like the unlikely combination of a funky wah-wah guitar, orchestral charts and a melancholy violin coda on "Indian Train Ride."

The best example of Møller's ability to renegotiate jazz tradition is perhaps his new version of Wayne Shorter's familiar jazz theme, "Footprints," now recast as "Mumbai Footprints." Like all the album, it is a theme that bursts with life and the will to find new ways in music by combining and respecting different cultures. Add to this a superb package with excellent notes by jazz critic Christian Munch-Hansen (both in Danish and English) and the final impression is yet another winner from Lars Møller and Aarhus Jazz Orchestra.