By PHIL DIPIETRO
November 1, 1999
Sign in to view read count 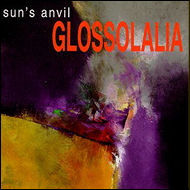 This disc was first released in 1996 so it isn't new, but its first pressing, albeit small, has sold out, so it has consequently been re-thrust into the marketplace at MP3.com. Collaborators bassist Neal Fountain and guitarist Jonathan Townes co-produced the project, which also involves Jeff Sipe (Apt. Q258)-drums (Aquarium Rescue Unit, Leftover Salmon, Shawn Lane, Jazz is Dead) and Count M'Butu (percussion), and Rich Cohen on alto. Fountain, Sipe and M'Butu are associates of Atlanta poet/comedian/ musician/Hampton Grease band/Aquarium Rescue Unit/Fiji Mariners founder Colonel Bruce Hampton. To make things even more interesting, John Medeski (keyboards) of the groundbreaking hippie jazz/jam band Medeski, Martin and Wood is present throughout.

Glossolalia is a religious term for the ancient-and modern-practice of speaking in tongues, or, as is more applicable in this instance, speaking in a state of ecstasy. Overlooked by the critics in the past, largely because it was well-nigh impossible to procure, it is a remarkably well-conceived and executed ensemble effort, ranging from very tight grooves to looser,jammier pieces. Logging in at 70 minutes, all the players receive equal soloing time in the make-up of this exemplary group effort.

"Science Project" starts floats Medeski's organ over a loopy B-52-ish funk groove. A jagged scratch-funk guitar solo breaks down into a Sipe drum ostinato before the ending. "Zygote" builds slowly, with a short fender-rhodes head giving way to a lyrical, modulating bass solo peppered with double stops. An acoustic piano solo by Medeski gives way to a blues-rock freakout by Townes, leading us back to that Herbie-influenced head. "QADR" has an interesting format with an out intro going into an absolutely fluid, harmonically adventurous fretless bass solo, then a beautiful saxmospheric melody. This is inturn underpinned by a two note bass line which builds motifically on a basmati bed of shimmering guitar chordal work. A spaced-out and, at the same time, full of space, guitar solo over a rubbery bass line runs out of gas in a good way and serves as the songs ending. "Scuba Diver" is an aptly named underwater spacey, curry-spiced world groove. A purposefully primitive and very acoustic sounding anti-solo on fretless bass is featured over Townes' chordal washes, which turn into a microtnal guitar solo over M'Butu's tabla.

"Moma Raths Outgrabe" follows, a Townes bebop tune featuring extreme walking bass and a fantastic B-3 solo before the tune goes out towards its end only to come back in while Sipe rides it out. Think Big John Patton with Jaco on bass."Skipping Sunday Schools" starts off as a Tower of Powerish 4/4 etude that skips a beat or two on its way to a scratch-funk guitar/drums improv'd breakdown leading into "Old Man," featuring a tighter tune structure than most here, a shuffle-type groove marked by hot,conventional sax, guitar and organ solos. "Muse" is a wicked, tribal Weather Reportish groove, featuring a snakecharmerish head voiced on bass, punctuated with misplaced guitar commas turning into a fuzzed out bass line under a modern, angular guitar solo. The bass line morphs while the horn "section" (achieved by keyboard doubling by Medeski) plays over it. An extended bass solo featuring chords hits over a bed of Rhodes, followed by a short guitar burst and extremely tight ensemble passage before the end.

Of the remainder , "Penterra" especially is of note, ending it all beautifully with a traditional jazz ballad featuring Evans-inspired lyrical piano solos and a hauntingly dulcet bebop guitar section, all by what might as well be LaFaro and Motian. Just gorgeous.

While each player is effusive in spots, the utmost in taste and team-playing restraint is exercised throughout. All tunes feature world class playing and soloing by all involved. Medeski's expansive role here alone should send MMW fans the world over clicking away at MP3, not to mention Townes' playing, which, together with Fountain's, clearly deserves much wider recognition. Be happy and relish in your good taste. For the time being, at least, they are your own little secret.