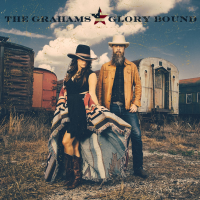 Friends since their childhood, Alyssa and Doug Graham are now husband and wife. They are also a duo to be reckoned with. Their music is a joyous melange of country, folk, blues, roots, bluegrass and pop with some jazzy elements thrown in for good measure. It's definitely American music. If one were asked to place the Grahams into a genre or define the duo's music the best and most simplistic term would be Americana. Americana if only for the fact that its an umbrella term for a hard-to-define musical genre that is a mix of country, blues, roots, pop, jazz, bluegrass, folk with just the slightest dash of rock 'n' roll.

The Grahams are all of those things and more. On Glory Bound, Alyssa and Doug continue right where Riverman's Daughter (12 South Records/Red Distribution, 2013) left off. The CD features more wonderful stories told in musical form with songs—nostalgic songs, happy songs and yearning songs about desire, longing and regret.

How else does one explain the title track which features the lyric "I wish hadn't done the things did when I was young all the little tablets I melted on my tongue." If that doesn't perk the ears up immediately, nothing does. And it doesn't stop there, the next eleven tracks are all driven by Alyssa's powerful vocals and the duo's strong lyrics.

Following a trip down the Mississippi River's historic Great River Road, Riverman's Daughter was recorded in an effort to pay tribute to the mighty river and the folks who live near the Mississippi and off of the bountry it provides. It was a beautifully envisioned testament to and document of the American condition. Glory Bound has a similar story behind its genesis. After taking a series of train trips, Alyssa and Doug sought to tell the story of the heyday of the great American railroads and their treks across the plains, prairies and wide open spaces that make up our great country.

They succeeded. The resulting CD features stories that would not have been out-of-place on an album by The Band, by Neil Young or by Johnny Cash. The songs blend personal detail (whether made up or autobiographical) with good old-fashioned country ethos. The musical genres on which the Grahams lay their hats, are all over the map. There is country, as expected, gospel, blues and folk. The beauty of this music is the overall genuine western feel of both the prose and the playing.

Of the many highlights to be found on Glory Bound, "Gambling Girl" with its blues harp, "Kansas City" (featuring a dueling guitar and violin), "The Spinner," the ballad "Biscuits," "The Wild One" (which would have been at home with Levon Helm on vocals) "Lay Me Down" and the defiant "Griggstown" are all excellent. The title track as well as "Mama" (with its gospel-tinged arrangement) are also among the cream of this crop.

Alyssa's voice is a powerful, amazing and astounding instrument. It makes the listener take notice without delay. Doug plays like a virtuoso, his fingers dancing over the strings. He can pick, pluck and strum with the best of them. The album features honest and real lyrics. The music and performances are riveting, touching on the past and all of its beauty while holding one foot firmly in the present. Glory Bound is a modern day classic.

The deluxe promotional version of the album features the soundtrack to the Rattle The Hocks documentary which was produced by the Mississippi All-Stars Cody Dickinson features live versions of "Griggstown," "Gambling Girl," "Glory Bound," "Lay Me Down," "Tender Annabelle," "Kansas City," "Mama," "Biscuits," "Blow Wind Blow," "The Spinner," "City of New Orleans" and "Big John."