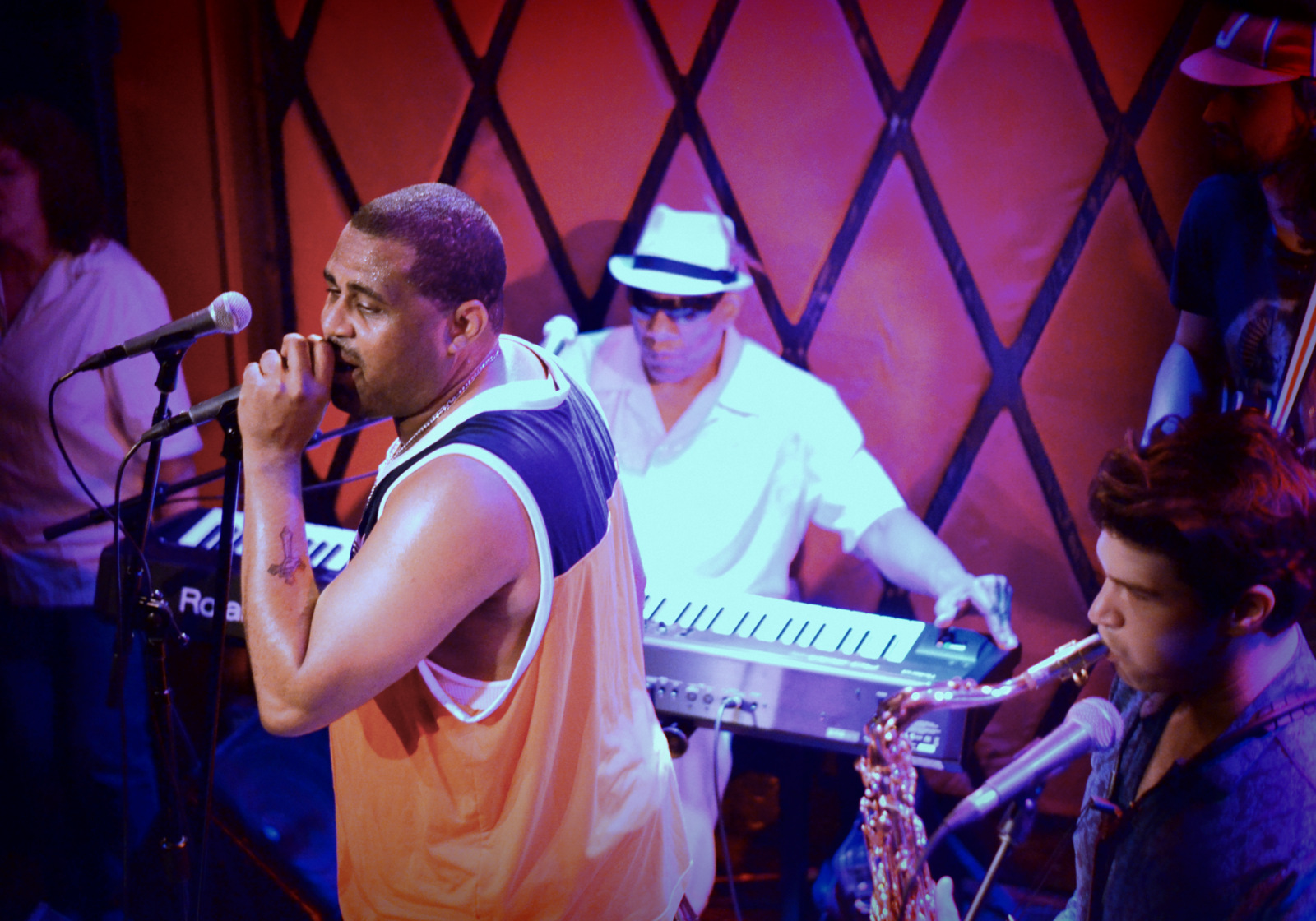 Glen David Andrews is a showman—pure and simple. He thrives in the spotlight. Shine a spotlight on the man and he comes alive. He is a force of nature, and one to be reckoned with. He has been described as over-the-top. In many ways that's an understatement. He is over-the-top. He is pure energy. He has charisma. He has stage presence. He also has a pedigree. His cousins are Trombone Shorty and James Andrews. His older brother Derrick Tabb is a member of the Rebirth Brass Band. DNA is one thing, but talent is quite another. And Andrews has talent to spare. He is an amazing player and singer. The trombonist/vocalist's legendary performances (melding rock, pop, soul, gospel, jazz, funk and brass) are nothing less than electrifying.

On what was the warmest day of the year (to that point) in New York City, Andrews and his band (Alex J. Hall on drums, Ron Williams on bass, Ricio Fruge on trumpet, Josh Starkman on guitar and James Martin on saxophone with a special appearance by Henry Butler on keys) burned through a blistering set at the Rockwood Music Hall. If it was hot outside the venue, it was even hotter inside. The walls were sweating, the floor was bouncing. The audience members were singing along and jumping up and down while Andrews, their leader, functioned as master of ceremonies at what was part rock 'n' funk concert, part gospel revival service, part Mardi Gras party and one helluva good time.

Appearing on stage sans his trademark white suit, Andrews wore an orange and blue Adidas tank top, gold chain blue shorts and penny loafers. Opening with "You Don't Know" Andrews baritone voice was in fine shape. Andrews punctuating the song (as well as many others during his set) with the trademark New Orleans stage shout of, "Put your hands up and scream!" and, the packed audience responded just as asked.

Andrews never forgets his roots. He is mindful of those who came before him as well as those who have had a spiritual and cultural influence on both his music and his life. When it came time to bring Henry Butler on stage, the reverence was clearly heard and seen in Andrews words and body language, when he said, ..."all the way from the Caliope projects in New Orleans, everybody make some noise for Henry Butler!" Butler who was dressed head-to-toe in a crisp white outfit that included a dapper fedora with a black band was then led on stage. After sitting down behind his Roland rig and getting acclimated to his surroundings the blind keyboardist along with Andrews put the band through its paces with a killer version of "Right Place, Wrong Time." The joy of playing together was clearly evident as both men were sporting huge smiles.

Next up was "Bad By Myself" which Andrews introduces with a sly comment dedicating the songs to Butler's ex-wife. When the song ended, Butler wowed the crowd with an extended solo that segued into "Tipitina" causing the already jacked-up crowd to erupt. Butler continued to sit-in and add his signature piano work to augment the band's tight performance on the autobiographical "Surrender," which is about recovery and was written by Andrews during his stay in the Boston-based Right Turn rehab center.

After the song wound down, Andrews, who was by now soaked from head to toe took a moment to towel off and make a request of Butler, "Mr. Henry," he asked, "will you do one more with us?" Butler nodded, and the version of the funky blues-rockin' "NY to NOLA" from Andrews' 2014 CD Redemption (Louisiana Red Hot Records) send the crowd into a frenzy shaking the house to its core.

Andrews then swept his arms toward Butler, smiled and announced "Let's hear it for Henry Butler!" As Butler was guided off the stage Andrews, a consummate joker stated, "The after party tonight is at Henry's house in Brooklyn. Yeah, we're gonna have some ginger ale and soda water."

The audience, which was already worked-up went absolutely bonkers as Andrews led the band through a hot version of "Goin' Back To New Orleans" during which he walked through the crowd (with Fruge and Martin in tow) and though packed shoulder-to-shoulder managed to not only part but allow Andrews an opportunity to dance with a number of women in the audience. The "Treme Prince" (Andrews' nickname) ultimately ditched the sax and horn players only to find himself delighting the crowd while playing trombone in the balcony.

Returning to the stage, he led the band through "Treme Song" better known as the theme song from the HBO drama Treme, "Knock With Me, Rock With Me," with its call-and-response refrain "Gimme a dime/I only got eight." It was at this point that for the second time he descended into the crowd (this time all alone) and spend even more quality time with his adoring fans, stopping to shake hands, slap backs and dance with them.

Returning to the stage, Andrews introduced the band threw in a snipped of the gospel favorite "Goin' Up Yonder" and eventually descended again (for the third and final time) into the crowd heading toward the front door while singing "Let Me Go" with its, "Don't let me go" lyric. When he got to the door he was gone, the show was over and the lights came up.

As the audience filed toward the rear exit, Andrews was waiting there meeting with his fans and friends (old and new), shaking hands, taking pictures and autographing newly purchased CDs.