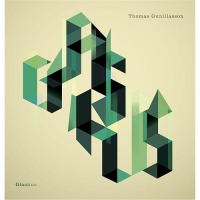 Gunillasson's debut album as a leader features original tunes written over a five year period. He is accompanied by two members of Thymeshift—drummer Björklund and reeds player Thomas Backman, and bassist Johannes Lundberg. Gunillassson's tunes meld the driving, aggressive sound of metal with virtuoso, atmospheric guitar pyrotechnics and sampled beats that reference the experiments of Radiohead and Björk.

This encompassing aesthetic works best when Gunillasson's impressive technique is submitted to touches of lyrical melancholy and fragility, as on the infectious "Kölden" and "Skisser Från Rosarve." Imaginative command of the guitar enables him to adapt organically to a heavy, fierce metal attack on a cinematic, Western-movie desert on "Vårstenar." On "Darsi" Gunillasson employs atmospheric sounds to create an exotic-meditative environment. On "Stephep Guitars" he frames the aggressive onslaught within a playfully addictive rhythmic setting. The last piece, "Polar Guitar," is the most beautiful. Gunillasson plays solo using various effects to weave a touching texture that lingers in mind long after it ends.