By DUNCAN HEINING
November 9, 2014
Sign in to view read count 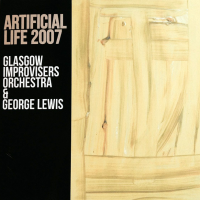 The importance of ensembles such as the Glasgow Improvisers Orchestra cannot be underestimated. Their work since their formation defines a distinctive approach to large-scale, free improvisation rooted in a well-defined philosophy of collective music-making. As George Lewis, trombonist and 'composer' of Artificial Life, remarks in the record's sleevenotes:

"As with all improvisation, including our everyday-life human efforts, all aspects of the performance are achieved through negotiation and consensus, and the success of the performance is less a question of individual freedom than the assumption of personal responsibility for the sonic environment."

This not a music of 'devil take the hindmost,' Sturm und Drang. Rather, it is a music of service and communion made by a collective of creative voices. Some voices are, of course, more noticeable than others. Raymond MacDonald's sustained notes on soprano and alto interjections, the brief Spanish interlude from trumpeter Robert Henderson and Gerry Rossi's pianistic touches on Artificial Life Page One deserve special mention. Elsewhere, the unusual textures created by George Burt on acoustic, Neil Davidson on electric guitar, Jim McEwan's Fender Rhodes and Rossi on acoustic piano offer what might almost be a trademark of the GIO sound.

In fact, there is throughout this record a wonderful layering of textures quite different from the much more traditional approach achieved by the stacking of harmonies. Here, this is achieved through the emergence of groupings of musicians/voices interacting with and supporting other such groupings. "Spontaneous" is, perhaps the wrong word to use. It is more the sense in each individual that they can at any moment contribute to or even shape the direction of the direction of the music. This is done by a process of joining and gently pushing the music somewhere new. The best analogy, I can give, is that of a flock of birds in flight. And there are moments of exquisite beauty to be found aplenty on Artificial Life. At 4'30" during the second movement of the piece, a moment of silence is followed at 4'45" by first the entry of woodwinds, whose long notes contrast with the more staccato notes of the brass and voices. Anne Rankin's oboe is particularly noteworthy here. The volume builds into a Tayloresque section from 5'15" with drums and piano joining in before electric guitar and brass lead the ensemble into a crescendo around 5'40." This ends abruptly at 6'00" leaving just percussion and electric guitar. A brief intervention from George Lewis' trombone is joined first by Davidson on electric guitar, then by the combination of Burt's acoustic guitar and the voices of Maggie Nicols and Nicola MacDonald before woodwinds, piano and Fender Rhodes and rising brass come in at 6'45." Now the music rises and falls with flute and saxophone chattering within the music and a new passage then commences around 7'40." Bear in mind, this brief period has barely lasted three minutes but here, in microcosm, is GIO's universe writ large and small. Everyone has contributed. Everyone has given voice. Together, they have created and shaped this music.

The final piece is called "Free Improvisation"—bet it took hours to come up with that, guys! Its opening that recalled for me Penderecki's Threnody with the spooky, ethereal voices of Nicols and MacDonald which combine so elementally with the brooding baritone saxophone of Graeme Wilson, with long brass notes and Burt's insistent acoustic guitar. This is, once more a music rich in colour and texture. There is a wonderfully dramatic moment with the full orchestra at 9'30," whilst electronics, fluttering voices, brass and woodwinds at 13'10" build to a heightened sense—not of chaos but—of carnival. I've heard that Japanese composer Toru Takemitsu once said, "Why can't music be like a tree?" He meant, "Why must music develop horizontally? Why can't it grow vertically instead?" It's a point not lost on GIO. Here they also remind us that the dramatic in life and art is occasional, whereas quieter joys are ever-present, if we would but notice them.