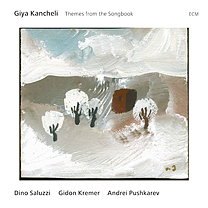 There is a potent element in the sophisticated pioneer spirit of ECM Records and its founder, Manfred Eicher, that is perfectly illustrated by this recording. Giya Kancheli (born 1935) is a Georgian composer who has produced, among other compositions, film and stage scores over the past 40 years. Kancheli transformed the elements of these scores into piano reductions he called Simple Music for Piano, subtitled "33 miniatures from Music for Stage and Screen."

Kancheli's son, Sandro, shortly before his father's 75th birthday, showed these scores to Eicher, who immediately thought would be of interest to Argentinian bandoneonist Dino Saluzzi, in preparing a tribute to the composer. Independently, violinist Gidon Kremer expressed a similar desire, working with vibraphonist Andrei Pushkarev from his ensemble Kremerata Baltica. Pushkarev ultimately recorded with both Saluzzi and Kremer separately, the results edited and engineered into the present recording. Such is the story of Eicher and ECM: East meeting West and North meeting South, all in the mind of a musical visionary.

Full orchestral music reduced to a chamber-sized format allows for the music's intimate anatomy exposed. Held together by Pushkarev's sensitive mallets, the compositions take on a pastoral life of their own: introspective, seeking, and improvised. Pushkarev's interaction with Saluzzi is captured and carefully displayed on the themes from When Almonds Blossomed (1972) and As You Like It (1978), each musician trading the lead with the other, peeking in every nook and cranny of the composition.

Likewise, Pushkarev's work with Kremer is almost empathic, alongside Saluzzi in the main theme from The Crucible (1965). The overused word "soundscape" remains most appropriate for the airy topology of the piece, where each instrument floats separately among and through one another. The instrument combination gives the music a fragrance of Eastern Europe by way of Vienna (Vienna, Argentina, that is). Eicher offers a glimpse of the music in its original orchestral/vocal form by reprising the disc's opener, "Herio Bichebo," from Earth, This is Your Son (1980), offering a nice contrast to the reduced version.

The alchemy involved in conceiving music like this, much less making it, is of a miracle variety. This project is beyond simple genius dispensed by virtuosi, its substance if of a whole other world, one that looks within rather than without, for those things previously missed or never considered.